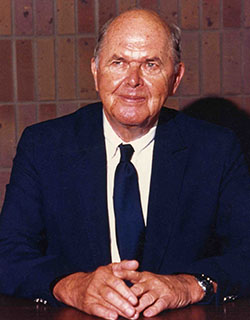 A charter member of the Coastal Educational Foundation Inc., E. Craig Wall Sr. held many offices including chairman in 1956 and 1965. He was instrumental in the development of the college, in securing land for the campus, and in supporting the expansion of campus facilities. His leadership and guidance for more than three decades had had a tremendous impact on the successful development of Coastal Carolina College. Wall became a director emeritus of the Foundation in 1982.

His commitment to higher education went beyond the local level. From 1967 to 1971, he served as chairman of the South Carolina Commission of Higher Education.

The E. Craig Wall Sr. School of Business Administration Building was completed and dedicated in 1993.