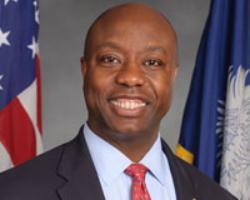 Timothy E. Scott was appointed to the United States Senate in January 2013 to represent South Carolina following the resignation of Jim DeMint. He is the only African American in the Senate and the first black senator from the South since Reconstruction. He was previously a congressman serving the state's First District in the United States House of Representatives (2011-2013), where he was a member of House leadership and sat on the influential House Rules Committee. Scott served on Charleston County Council for 13 years, including four terms as chairman, and in the South Carolina House of Representatives for two years where he was elected chairman of the Freshman Caucus and House Whip.

As a legislator, Scott has focused on reducing spending, reforming the tax code and supporting economic freedom and entrepreneurship. He was an original cosponsor of the Cut, Cap and Balance Act and cosponsored two bills aimed at adding a balanced budget amendment to the Constitution. He has also been an outspoken supporter of right-to-work states and authored the Protecting Jobs From Government Interference Act.

Scott grew up in North Charleston and earned a bachelor's degree in political science from Charleston Southern University in 1988. Prior to his political career, he was owner of Tim Scott Allstate and partner of Pathway Real Estate Group.

"Sometimes in life, you must fail forward," Scott told graduates of the Class of 2013. "Failure only becomes fatal when you quit." He also urged the graduates to "be willing to stand up for those who can't stand up for themselves" and to take risks. "To maximize your potential, you have to exit your comfort zone."

Scott received the honorary degree Doctor of Public Service from Coastal Carolina University during the May 2013 commencement ceremony.