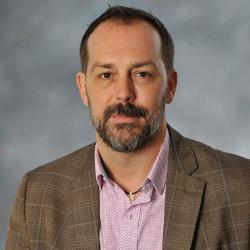 During his tenure as chair of the Department of Mathematics and Statistics, Solazzo initiated several projects at Coastal Carolina University (CCU) to improve the success of CCU students in math. He is an active member of the Mathematical Association of America (MAA), serving as the MAA South Carolina state director from 2012 to 2015. Since 2012, he has served on the MAA subcommittee on Undergraduate Research in Mathematics. In 2014, he served on the South Carolina Department of Education’s mathematics writing team, which was charged with writing the 2015-2022 South Carolina College- and Career-Ready Standards for Mathematics. Solazzo travels to Africa yearly to teach a three-week course on advanced linear algebra for the African Institute of Mathematical Sciences Next Einstein Initiative, and he enjoys visiting Horry County elementary school classrooms to promote the beauty and importance of mathematics in today’s society.