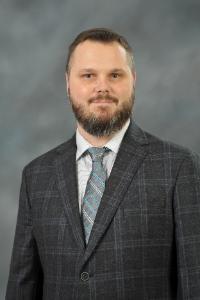 Brian's passion is helping students achieve their goals. Brian is from Goshen, Alabama and recieved his Bachelor's of Science in Social Sciences and his Masters of Science in Sport and Fitness Managment (Athletic Adminitration) from Troy Univeristy.

Brian chose to work at CCU because of the family atmosphere as well as the opportunity to help grow with Coastal. Brian brings over ten years of experience coaching and also over ten years of advising to the CCU community.

Fun fact abbout Brian is he is the first person in his family to go to college.

Megan chose to work at CCU because it's her alma mater.

Fun fact about Megan is that she is the 3rd generation in her family to work in college athletics.

Maggie has a passion for seeing the “lightbulb moment” in students when they finally understand something that had previously been difficult. Maggie also love when students realize what career path they would like to pursue. Maggie is from Charolette, North Carolina and she has received her Bachelor of Science in Sociology from Virginia Tech and a Master of Arts in Higher Education Administration from the University of Louisville.

Maggie chose to work at CCU because of the family atmosphere around CCU’s community, the opportunities for professional growth, and wanted to be close to her family.

Fun fact about Maggie is the second time she has worked at CCU. Previously, Maggie worked at CCU from 2014-2016.

Yvette has a passion for helping students reach their full potential. Yvette is from Norfolk, VA and she has earned her B.S in Business Administration with a concentration in Finance.

Yvette chose to work at CCU because she believes education gives every student an equal chance to make a difference.

Fun fact about Yvette is she was a guest at former First Lady Michelle Obama’s final First Ladies luncheon.

Tracy is from Catfish, North Carolina. Tracy has earned his Bachelor of Science in Business Education and his Master of Arts in Higher Education/Administration from Appalachian State University.

Tracy chose to work at CCU because of the family atmosphere as well as the appeal of CCU. Tracy also felt there was a lot of room for professional growth at CCU.

Fun fact about Tracy is he has lived in four states in the past four years (Washington, California, North Carolina, and South Carolina) but he is tired of moving.

Tye is from Florence, South Carolina. He earned his Bachelor of Communication and Master of Arts in Liberal Studies from CCU. He is also currently pursuing an Ed.D. degree, where he seeks to study the impact that technology has on learning at the K-12 level.

Tye's passion for education stems from his own experience of personal growth during his undergraduate years and his continuous belief that education is the root of success. He was blessed with amazing faculty and staff who helped shape his own college experience, and he seeks to foster a meaningful college experience for the students he works with now.

Before joining the Academic Resource Center, Tye served as an admissions counselor here at CCU. He chose to work at Coastal because he completed two degrees here, and he was not ready to leave! He loves the campus, the people, and the impact that CCU has had on his life.

A fun fact about Tye is that he was born in Spain.

Liz Winn is originally from High Point, North Carolina. She earned her Bachelor of Social Work from East Carolina University and Master of Education in Higher Education Administration from Columbia College.

Liz is passionate about being a support person and a dependable resource for students. She began working in higher education in 2013 and has held positions in Student Life, Housing, and now Academic Advising. She loves working at Coastal because of the beautiful campus, diverse student population, and great colleagues.

Liz can usually be found on the beach with her nose in a good book!