Rendering of Thompson Library, which is scheduled to open in Spring 2024.

A groundbreaking ceremony for the University’s Thompson Library was held in May. The $29.8 million, two-story, 64,000-square-foot library will integrate much-needed student spaces and services with cutting-edge, immersive technologies.

Thompson Library is named in memory of longtime Conway residents John and Barbara (Richardson) Thompson, who generously gave a $4.425 million estate gift to the University. 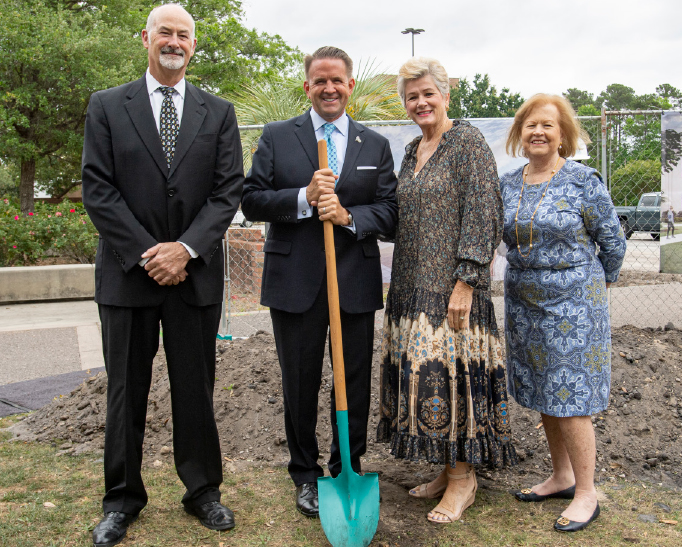 President Michael T. Benson (with shovel) is flanked by Phil and Pat Thompson along with Linda Gagni at the Thompson Library groundbreaking ceremony. Phil is the nephew of the late John and Barbara Thompson, for whom the library is named.

During his remarks, CCU Provost Dan Ennis shared a passage from one of the institution’s first library books, as well as his excitement about the new facility.

“The mission of a library is literacy, education, and the preservation and dissemination of knowledge,” Ennis said. “Welcome to a historic moment in the life of this institution. May we never forget how precarious the freedom to think and learn can be, and how important libraries are. They are the fundamental buildings of a university.”

The new library’s first floor will feature a large makerspace, a virtual reality and data visualization lab, and individual studios for video/audio production. It will also feature a large, open study area for collaboration and socialization. Library services such as instruction and research assistance and equipment checkout will be located in the facility. The second floor will include academic and athletic tutoring, tutoring and learning centers, Coastal Student Success Center, and Student Computing Services.

The Starbucks on campus, which is in Kimbel Library, will be relocated to Thompson Library. Kimbel Library is scheduled to undergo a $15.5 million renovation after the new library opens.