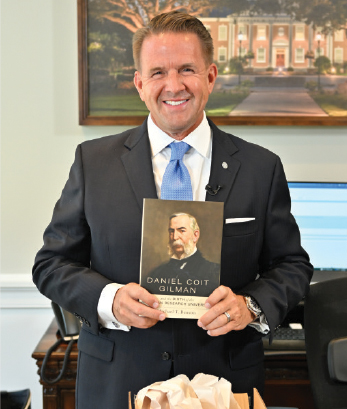 CCU President Michael T. Benson is the author of a newly-published book, Daniel Coit Gilman and the Birth of the American Research University. In it, according to Johns Hopkins University Press, the book’s publisher, Benson claims that Gilman’s enduring legacy will always be as the father of the modern research university – a uniquely American invention that remains the envy of the entire world. He also explains how many university elements that are taken for granted – the graduate fellowships, the emphasis on primary investigations and discovery, the funding of the best laboratory and research spaces, the scholarly journals, the university presses, the sprawling health sciences complexes with teaching hospitals – were put in place by Gilman at Johns Hopkins University.

Gilman’s career included serving as the third president of the University of California; the first president of Johns Hopkins University, a position he held for 25 years; and as one of the original founders of the Association of American Universities.

Benson also is the author of Harry S. Truman and the Founding of Israel (Praeger, 1997).