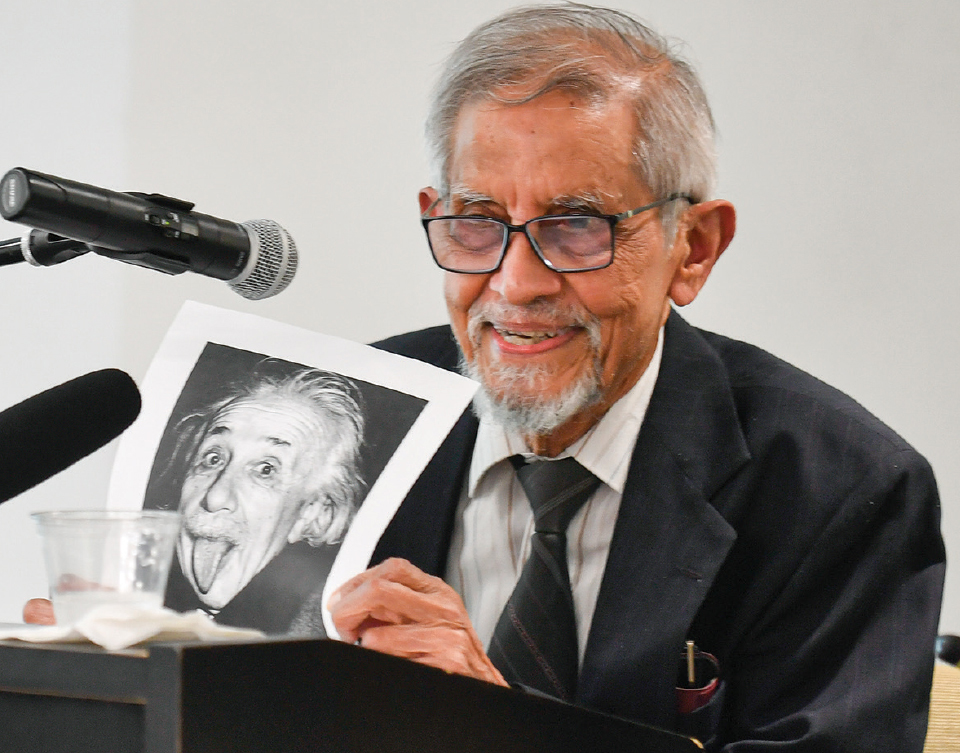 During the department naming ceremony, Subhash Saxena referenced numerous individuals who had a major impact on mathematics, including Albert Einstein.

The ongoing generosity of Subhash Saxena, distinguished professor emeritus of mathematics, continues to impact the University. In recognition of his most recent major endowed gift, the Gupta College of Science mathematics department has been officially named the Subhash Saxena Department of Mathematics and Statistics. The endowed fund supports faculty members and undergraduate students who conduct mathematics or statistics research.

“We are extremely grateful for Dr. Subhash Saxena’s unwavering commitment to Coastal Carolina University and our students,” said CCU President Michael T. Benson. “His unending generosity speaks volumes about his love for the University and his desire to see it continue to flourish. He had a profound impact on countless students during his storied teaching career, and we are privileged to recognize his nearly 50-year association with the institution by naming the mathematics and statistics department in his honor.”

Saxena said, “I am very humbled by this honor that has been given to me.”

Saxena began teaching at Coastal in 1973 and was a mainstay of the mathematics department for nearly 30 years before retiring in 2000. He served as department chair from 1987-1993. He is also credited with establishing a Pi Mu Epsilon national mathematics honor society chapter on campus.

“We are very excited to honor Dr. Saxena, who is loved by so many from the CCU family,” said Diane Sanders ’05, CCU’s vice president for advancement and alumni engagement. “It is extremely fitting that we recognize his ongoing generosity by naming the Subhash Saxena Department of Mathematics and Statistics at the University. Through this well-deserved recognition, Dr. Saxena will be forever associated with the department he helped to firmly establish and develop through the years.”