Teal and Bronze - Coastal Carolina University
In This Section

From underdog to national champion to world champion

She’s from a small community and attended a midsize NCAA Division I school, but was born to do big things. 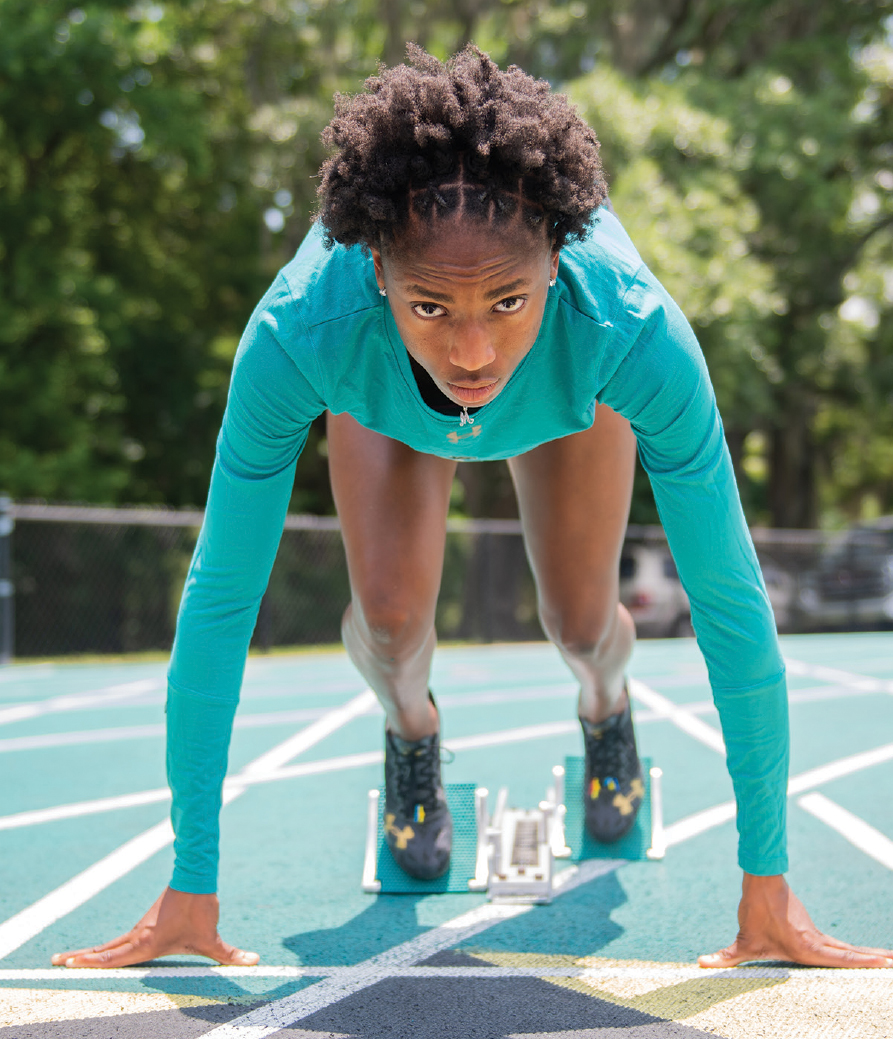 In March 2022, Melissa Jefferson became Coastal Carolina University’s first-ever individual national champion when she ran the 60-meter dash faster than anyone else (7.09) at the 2022 NCAA Division I Indoor Track and Field Championships.

Then in June, she ran the 100-meter dash in 10.69, which was fast enough to win a national championship at the 2022 Toyota USA Track and Field Outdoor Championships. The victory earned her a spot on the USA National Team to represent the United States at the 2022 World Athletics Championships (WAC) in July. There, Jefferson, who signed a contract with Nike, made her professional debut and qualified for the semifinals with a time of 11.03 (second) and then the finals with a time of 10.92 (third). In the finals, she crossed the finish line eighth (11.03), running alongside Olympians Shelly-Ann Fraser-Pryce and Elaine Thompson-Herah. Jefferson turned in another all-star performance as a member of Team USA’s women’s 4x100-meter relay gold medal team. Running the first leg of the race, she and her teammates recorded a time of 41.14 to become world champions.

Yet perhaps bigger than all of these athletic accomplishments is something she did for her father when she was just 17 years old. She donated bone marrow.

When Melvin Jefferson was diagnosed with myelodysplastic syndrome, a disorder that can result in leukemia, Melissa was the preferred match to donate stem cells, a procedure she underwent in September 2018.

“I knew [the preferred match] was going to be me,” she said, “because that’s how God works. And I knew I was going to do

it because he’s my dad and I love him, and I want him here a long time.”

It took two days with two IVs in each arm: one to draw the blood into a machine that separated her blood from her plasma so they could harvest her stem cells, and another to put the blood back in her body. Her dad stayed in the hospital for 100 days, meaning he missed most of Melissa’s senior season of track at Carvers Bay High School in Georgetown, S.C., during which she won the state title in the 100-meters. Yet she already knew that she wanted to run collegiately, and she knew she wanted to do it at Coastal.

“Some people choose where they go to school based on popularity,” she said. “I came to Coastal because it felt right.”

She acknowledges that sometimes being a student-athlete can be a lot, because she’s a student first. The public health major said she had to learn early how to find a balance between school, the track, and time for herself. “Once I got a good feeling of how to maneuver that, I started to succeed more in different aspects.”

Her freshman year, the outdoor season was canceled due to COVID-19, but she competed in five meets during the indoor season with several second-place finishes and personal bests.

Her sophomore year was her first outdoor track season, and she made the most of it, being named the 2021 Sun Belt Most Outstanding Track Athlete, Most Outstanding Freshman, and the Newcomer of the Year. She was also the Sun Belt women’s champion in the 100-meters, 200-meters, and the 4x100-meter relay, setting school records in the first two, and becoming the first Chanticleer to qualify for the NCAA championships in the 100-meters.

“She works hard. She’s dedicated to the program. Seeing her do something like this is phenomenal,” said Sandy Fowler, CCU’s director of track and field and cross country. “She is one of the humblest people I know, and she takes everything to heart. Those two qualities have really brought her through.” 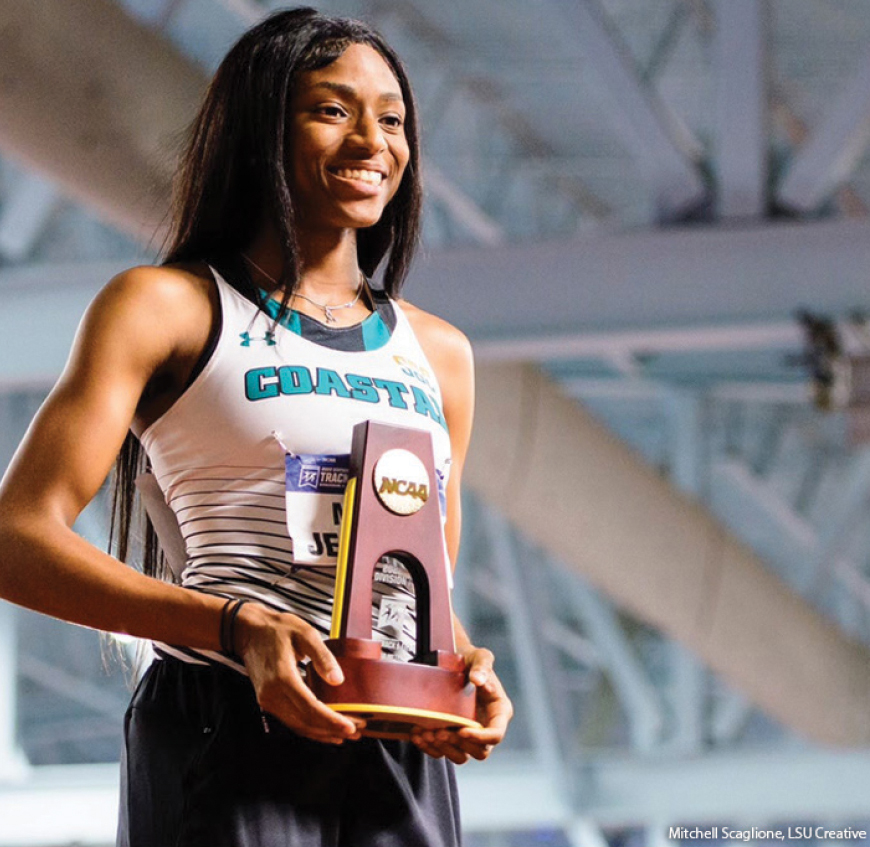 “My first year, 2019, I didn’t set any goals,” she said. “After COVID and as I was starting my sophomore year, that’s when I started to set goals. Me and my coach sat down and made easy, medium, hard goals. That year, I marked off every single goal except one. It’s a different kind of motivation when you sit down and write and manifest things into your life. It makes it so much more special when it comes true.”

“Melissa Jefferson is a diamond,” said Karl Goodman, CCU’s associate head coach. “She lights up the room and will be a star in track and field and in life. The things she has done on the track have been phenomenal, but it is just the start of her career. It will inspire people to come to Coastal Carolina and emulate what she has done. She is the fastest-ever woman to run in the collegiate system, and she did it at Coastal Carolina.”

She also has a good amount of fight in her, a quality she says has grown since she started running in high school.

“My high school is in a small community, in a small county,” she said. “Underdog has grown on me. That’s where I get my fight from. I want to prove that no matter where you come from or where you go, if you have the willpower and the faith, you’re unstoppable; you can do anything.”

The underdog mentality is what pushed her during the outdoor championships in June coming off of a disappointing performance at the NCAA championships, where she finished eighth.

“Going into [nationals], I fell off the face of the track world because I didn’t do that well at NCAA. I wasn’t one of the big names to be talked about,” she said. “But I’m used to being an underdog. I feel like that’s when I do my best work.”

“When I didn’t win [at NCAAs], I was upset. Then I had to realize, I’m not in control; God is in control. He allowed one of my teammates to let me know that I had nothing to worry about. The goal was to go to back-to-back NCAAs and make it to the finals in the 100 and 200. I crossed off those goals. Had I won [at NCAAs], I probably wouldn’t have done as well at USA Trials. I realized that one had to be sacrificed for the other.”

“God hears prayers. He listens,” she said. “A lot of times, people think He’s not listening or that He’s left them in the dark. His timing and His plan are always greater than what you could ever imagine for yourself.”

While representing USA at the world championships was a dream come true, Jefferson realizes she was also representing CCU and showing what can be accomplished at a midsize school.

“Being at a smaller school, you’re always overlooked. You have to make people know that you’re here and capable of doing anything anyone else is capable of doing. Having Coastal on my chest while I’m doing it made it that much sweeter.”