Meet the Board - Coastal Carolina University
In This Section 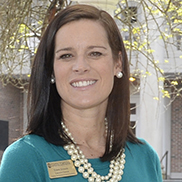 Eileen Soisson has been with Coastal Carolina University since January of 2012 and serves as CCU’s executive director of Training, Development and Service Excellence. Service excellence is the primary focus of CCU President DeCenzo’s Feel the Teal initiative launched in August 2012. Feel the Teal plays a vital role in CCU’s campus’ retention efforts by cultivating pride, encouraging growth and providing continuous training and service resources for the university community. Soisson and her team are responsible for building a stronger sense of community and culture among Coastal Carolina University’s faculty, staff, students, alumni and all stakeholders through providing the infrastructure and service training needed to ensure a productive, supportive and educational work environment. Heath Boice-Pardee has worked as an administrator in higher education for over 25 years in a variety of administrative and teaching roles. He is currently the associate vice president for student affairs at Rochester Institute of Technology, and has served as interim senior vice president for student affairs. Additionally, he is a distinguished lecturer in the College of Applied Science and Technology at RIT and has developed a higher education administration master’s concentration focusing on service leadership, customer service and the student experience – a one of a kind program in the world.

Boice-Pardee has taught for the University of Phoenix for over a decade and holds an appointment as an associate faculty member with the School for Advanced Studies where he was chosen as one of three faculty members to develop a Ph.D. in higher education program. He was awarded a prestigious research fellowship from the Center for Leadership Studies and Educational Research on the topic, Identifying Value in Higher Education: A Practitioner’s Perspective. His article based on that research, "Enhancing the Student Experience Through Co-Creation," was published by Wiley’s Recruiting and Retaining Adult Learners in October 2017. His first academic book, Elevating Customer Service in Higher Education: A Practical Guide (co-authored with Eileen Soisson and Emily Richardson) was published by Academic Impressions in 2018.

Greg Thompson serves as CCU's associate vice president of finance and controller and has been with the University since 2009. He has participated in the University’s Feel the Teal initiative since its inception and has strived to implement those Service Excellence principals into the Financial Services departments of CCU. Additionally, he is a licensed CPA and serves on several local not-for-profit boards.

Nick DeStefano currently serves as the Service Excellence Process Manager for Mcleod Health, a regional healthcare organization with 7 hospital facilities and 8,700 employees. His role allows him the opportunity to build a culture of excellence for all patients through process improvement projects, management coaching and team training. Prior to this Nick spent 10 years working at Coastal Carolina University in several roles. DeStefano became one of the first employees to get involved with Feel the Teal and attend training in 2012. He recognized the essential role of Feel the Teal in improving CCU's campus culture and climate and began to volunteer as a Feel the Teal facilitator for two of the training modules. DeStefano officially joined the team in Training, Development and Service Excellence in February 2016. His role focused on providing an engaging and educational customer service training program for student workers. He is also responsible for facilitating many of the training modules for faculty and staff.

DeStefano earned a Master of Science in organizational management from Misericordia University in Dallas, Penn.