Students in CCU’s intelligence and national security program and its politics program had a rare opportunity to interact with a high-ranking officer in the United States Strategic Command (STRATCOM) this semester when Rear Admiral Ryan Scholl visited campus.

Scholl, STRATCOM’s deputy director of plans and policy, spoke to the students in Professor Chris Ferrero’s class on weapons of mass destruction during the afternoon of Feb. 19. Later that evening, he addressed CCU’s National Security Club.

Beginning on an autobiographical note, Scholl told how, after earning a degree in electrical engineering and computer science from Princeton in 1987, he took a date to see the movie Top Gun. His companion was so taken with Tom Cruise’s exploits as an F-14 fighter pilot that Scholl determined then and there that he would be one, too, visiting a Navy recruiting station two days later. He was commissioned in 1988 and designated a naval aviator in 1990.

In his 31-year career so far, Scholl has logged more than 4,000 hours in the air, including multiple combat missions and operational tours supporting U.S. missions in Iraq, Afghanistan and Bosnia-Herzegovina. He has also served as demonstration pilot for the Blue Angels and commanded the aircraft carrier USS Harry S. Truman, which he called “a floating city with 5,000 people and 75 aircraft.” 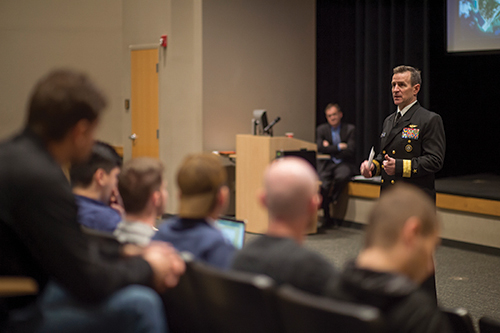 In his talk to the students, Scholl outlined STRATCOM’s history and mission, describing its role in commanding the nation’s nuclear weapons arsenal and its responsibility for deterrence (“peace through strength”) and response. He explained the three elements of its nuclear triad—bombers, submarines and intercontinental ballistic missiles—and the emergence of new strategic developments in the 21st century, including a space command.

Scholl took questions from students in the audience, which also included a group of ROTC cadets. His visit to CCU was in conjunction with STRATCOM’s Academic Alliance, which seeks to build bridges between the command and academia. Coastal is one of only four Southeastern universities in the alliance. Three CCU intelligence and national security students presented papers at STRATCOM’s Academic Alliance Conference in March.

Scholl’s visit to campus came at a moment when nuclear weapons were in the headlines, due to the Trump administration’s announced plans to suspend U.S. observance of the Intermediate-Range Nuclear Forces (INF) Treaty and the February summit between Trump and North Korean leader Kim Jong Un.