After six seasons as one of the most unique and effective coaches in collegiate football, Joe Moglia stepped down in January 2019 and passed the ball to associate head coach Jamey Chadwell.

A titan in the business world, Moglia brought his successful vision to the Chanticleer program in 2012. During his tenure, the program gathered an impressive list of honors, including its first-ever postseason win and four conference championships. The Chanticleers finished each year in the top 25 nationally and ranked as high as the No. 1 team in the country in both 2014 and 2015.

Moglia began his brilliantly nontraditional career as a football coach in the late 1970s and transitioned into investing, where he eventually rose to become CEO of TD Ameritrade before returning to coaching in 2008. His credo is epitomized in his student accountability strategy, BAM (Be A Man), which insists that his athletes “stand on their own two feet, take responsibility for their actions, always treat others with dignity and respect, and recognize they will live with the consequences of their actions.” 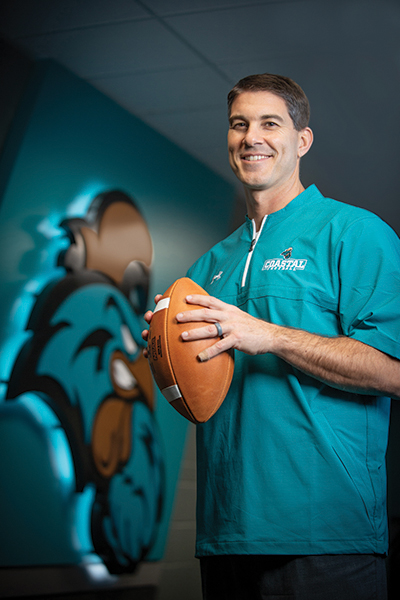 “I was saddened when Coach Moglia informed me that he was going to step down as our head coach,” said Chadwell, who joined the CCU coaching staff in January 2017. “He is an incredible mentor not only to me but also for all of the young men in our football program, past and present, and has helped develop countless student-athletes who have gone on to great success in life after football.”

A native of Tennessee, Chadwell played quarterback at East Tennessee State University (1995-1999), where he began his coaching career in 2000. He became an assistant coach at Charleston Southern University in 2004, where he later served as head coach for four seasons (2013-2016) after head coaching stints at North Greenville and Delta State. Six months after joining CCU, he was named interim head coach for the 2017 season during Moglia’s medical sabbatical.

“I am excited to build on the great foundation that Coach Moglia has put in place here as we continue to move forward in becoming one of the best programs in the Sun Belt,” Chadwell said at the press conference announcing the coaching transition. Moglia continues to serve as chairman of athletics until 2021, with executive authority for the football program.

The Coastal Carolina University men’s club ice hockey team won the East Coast Collegiate Hockey Association (ECCHA) Colonial Championship on Feb. 10 with a 4-3 victory over Liberty University. The championship is the league’s first in its six-year history. The team practices and plays home games at the Wilmington Ice House in North Carolina. They finished the 2018-19 regular season with a 15-7-3 record, winning games against the University of South Carolina, Clemson, the College of Charles-ton, and the University of Richmond on the way to the championship.

CCU volleyball player Leah Hardeman was named the 2017-18 Sun Belt Conference Female Athlete of the Year. The annual award is the highest individual honor given in the Sun Belt Conference, based on outstanding leadership, achievement and character. 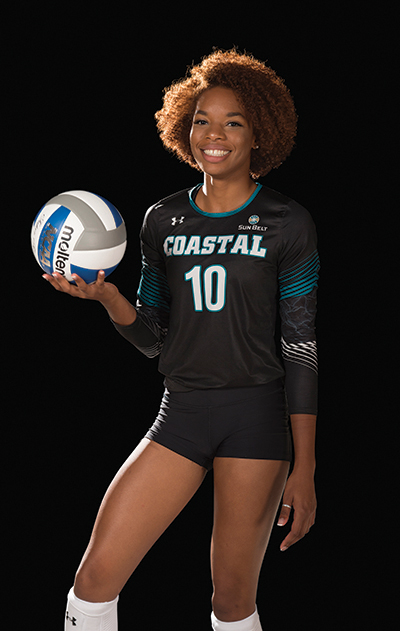 Hardeman, a graduate student in her final semester at CCU, started her stellar collegiate athletic career in the indoor volleyball program and switched to beach volleyball in 2018.

In beach volleyball, Hardeman posted a 5-9 record last season, and has played a role in helping to develop the young program that started in 2016.

A record 320 Coastal Carolina student-athletes posted at a 3.0 grade point average (GPA) or better for the Fall 2018 semester, including a record 138 that earned dean’s list honors. In addition, 79 Chanticleers had a perfect 4.0 GPA, earning president’s list recognition for the fall term.

On the men’s side, the men’s tennis team had eight of its nine members post at least a 3.0 GPA, including six who earned president’s (two) or dean’s list (four) recognition, while the men’s golf team had seven of its eight squad members earn a 3.0 or higher, with two each earning spots on the president’s and dean’s list.

Eight other teams had more than 60 percent of their rosters earn at least a 3.0 or better for the semester, while the football team recorded a department-best 34 student-athletes combined on the president’s and dean’s list.

LEGEND OF THE LINKS

Dustin Johnson, CCU alumnus and the world’s No. 1 golfer, was inducted into the Myrtle Beach Golf Hall of Fame on Feb. 27. Johnson played collegiate golf at CCU from 2003 to 2007. He held the title of No. 1-ranked golfer for 64 consecutive weeks, the fifth longest streak in PGA Tour history. The South Carolina-based rock band Hootie and the Blowfish, host of the annual Monday after the Masters tournament, was also inducted.