We both had a great time at CCU. Being in the BFA program in theatre production and design really helped jumpstart our careers. Through the Edwards College, we had plenty of hands-on experience. With help from our mentors, we were guided on many things that would help us in our futures, and we can’t show our appreciation enough. Being together at school was an awesome experience. It was great having a part of our support system right next to each other.”

When you read that word, you might think of people such as Oprah Winfrey, Ruth Bader Ginsberg, Margaret Thatcher, or Albert Einstein.

You’d be right, but, in the opinion of Coastal Carolina University’s Aneilya Barnes, Ph.D., professor and history department chair, the word also applies to the nearly 25% of CCU’s student population who are first-generation students.

Those four well-known names mentioned above are not just trailblazers in their respected professions; they were also first-generation students themselves.

A first-gen student is one who will graduate with a college degree, but whose parents do not have a four-year degree. They are often the first in their families to go to college, and sometimes the first in their communities, blazing a trail for others to follow.

Clearly, it’s a population with vision, perseverance, and courage. It takes all this – and more – to do something no one in your family or community has done before, but that doesn’t mean you couldn’t use a little help along the way.

Efforts to support first-generation students began in earnest at CCU in 2017, when sociology associate professor Lisa Winters, Ph.D., organized a panel to discuss topics that affect first-gen students, which, at that time, comprised more than 26% of CCU’s student body. The panel was a result of focus groups she’d held in 2016 with 20 CCU seniors who self-identified as first-gen.

“We discussed their college experiences – everything from their academic and extracurricular achievements to their social and financial support systems,” she said. “It was clear from these conversations that our first-gen students work incredibly hard, and that their efforts were deserving of greater recognition and support from our institution.”

After the focus groups, Winters worked with two first-gen students, Destiny Lewis ’17 and Marlene Martinez ’18, to create opportunities for other first-gen students to become more visible and better connected on campus. They established a student organization, CCU First, and planned CCU’s first panel discussion with first-gen faculty and staff.

Many of CCU’s 2022 resident advisers, who serve as live-in peer leaders and role models, are first-generation students.

Barnes, a first-generation student herself, was a participant on that panel, and she said the experience was a transformative moment.

“I sat there as a Ph.D., a tenured faculty member, and heard shared experiences in a way I never had before in my entire life,” she said. “I was so astounded by that experience, simply because I realized how invisible my experience as a first-gen student had been and how prevalent it actually is. It transformed my outlook regarding what needed to be done to make this population more visible.”

In 2018, Barnes began efforts to support the first-gen population in the Thomas W. and Robin W. Edwards College of Humanities and Fine Arts. She received support from then-Dean Dan Ennis, Ph.D., who is now University provost, to research best practices for learning who first-gen students are and how to serve them. She gathered a committee together, comprised of a member from each department in the Edwards College, to conduct the research.

“This is a surprisingly understudied population, given that they are 30% to 35% of all college populations nationwide,” said Barnes. “Even the National Center of Educational Statistics, run by the Department of Education, has shockingly little information on first-gen students compared to other demographics. So, a lot of our research is even figuring out who first-gen students are and what their needs are.”

What they discovered was compelling enough for Ennis and, later, incoming Dean Claudia Bornholdt, Ph.D., to agree to make it a standing committee, now known as Edwards First. While the research aspect of their mission is never finished, Barnes said, the committee focuses on programming in the college and creating community and visibility for the first-gen population. 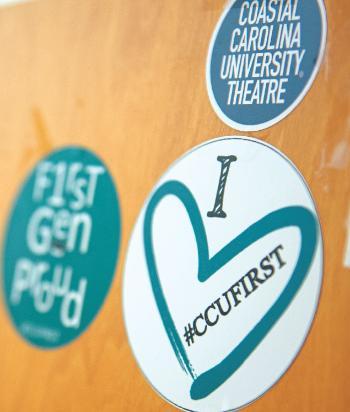 Also in 2018, then-CCU counsel Timothy Meacham ’79 established an endowed scholarship fund for students in the political science program that gives special consideration to first-generation students. Meacham was a first-gen student himself and wanted to help others who, like him, want to go to law school but don’t have the resources to do so.

“I recognize the social and financial challenges that are unique to first-generation students who want to attend professional schools,” Meacham said when the scholarship was established. “Many of them come from blue-collar working families and need assistance.”

A scholarship fund was also created in 2019 after Bornholdt pledged Giving Teal Tuesday donations to first-gen students; now, incoming first-generation students can apply for that assistance, as well as other scholarships.

Alexis Del Castillo ’20 was a first-generation student who benefited from one of the scholarships CCU offers, becoming the first TEAL 1000 scholarship recipient in 2016. He felt the weight of that trailblazer mantle as a first-gen student throughout his time at Coastal. 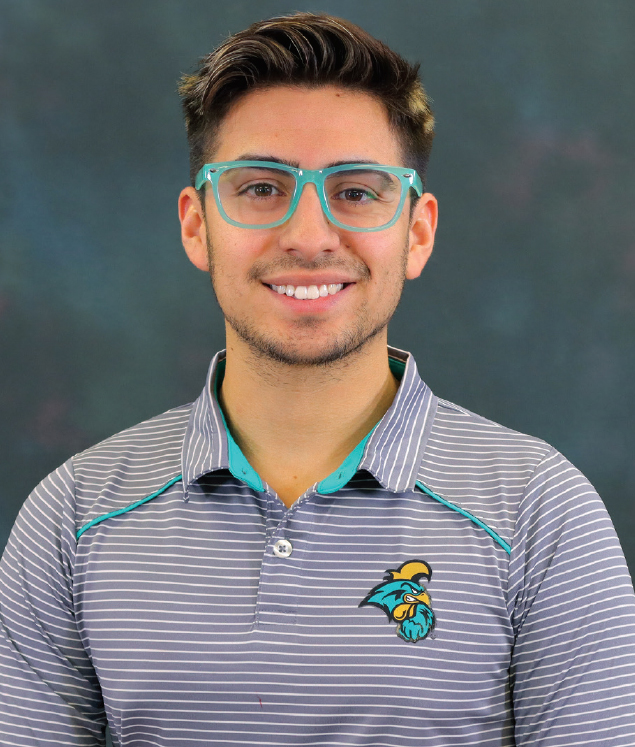 “Knowing that I was setting an example for my younger siblings made me feel that I had to give 110%,” he said. “I wanted to succeed because I wanted to show everyone that you can do whatever you set your mind to. In addition to being the first in my family to go to and to complete college, I felt like I had an additional service to succeed for my Latinx community.”

Del Castillo, a sixth-grade science and seventh-grade math teacher at Ocean Bay Middle School in Myrtle Beach, S.C., was named the 2023 Horry County Schools Rookie Teacher of the Year. He is still thankful for the support he received while at CCU and wants to encourage other first-gen students to persevere.

“I am beyond thankful for the various scholarships that I had to help me throughout my years,” he said. “My message to any first-generation student is to simply not give up and to apply for as many scholarships as possible. College is hard, but it’s not impossible. The feeling that comes with graduation is highly rewarding.”

Jill Dudley ’21, who was crowned Miss South Carolina 2022 in June, said the hardest part of being a first-generation student for her was not being able to receive advice about college life and experiences from her parents. She overcame this by getting involved with clubs, activities, and events on campus and taking advantage of the support offered by faculty members in the English and political science departments. 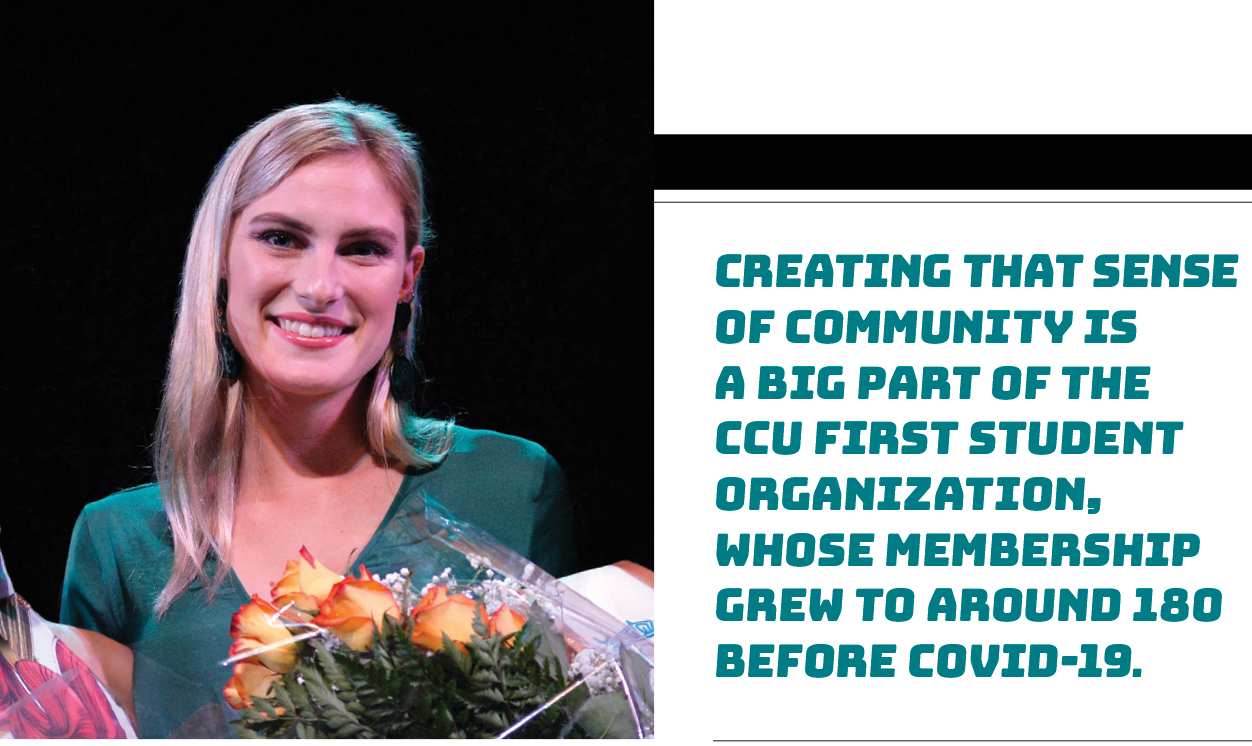 “I relied heavily on professors who wanted the best for me,” she said. “I sought out professors who wanted me to succeed and were willing to take their time to help me grow as an individual. A few of them include Jessica Liebeck-Richardson, Christian Smith, Emma Howes, and Michael Julius.”

“When they see how many faculty are first-gen, that changes the idea that they don’t belong here,” said Barnes. “It’s important that we shift that narrative. The fact they might need help with something is not because they are failing. All students need resources. We don’t want a student to feel like a failure when they need resources. It’s students from all backgrounds who take advantage of the resources we make available to them who are most successful.”

That initiative is just one of the ways Edwards First and CCU First support the first-gen population with what Barnes calls a three-prong approach of visibility, accessibility, and community. 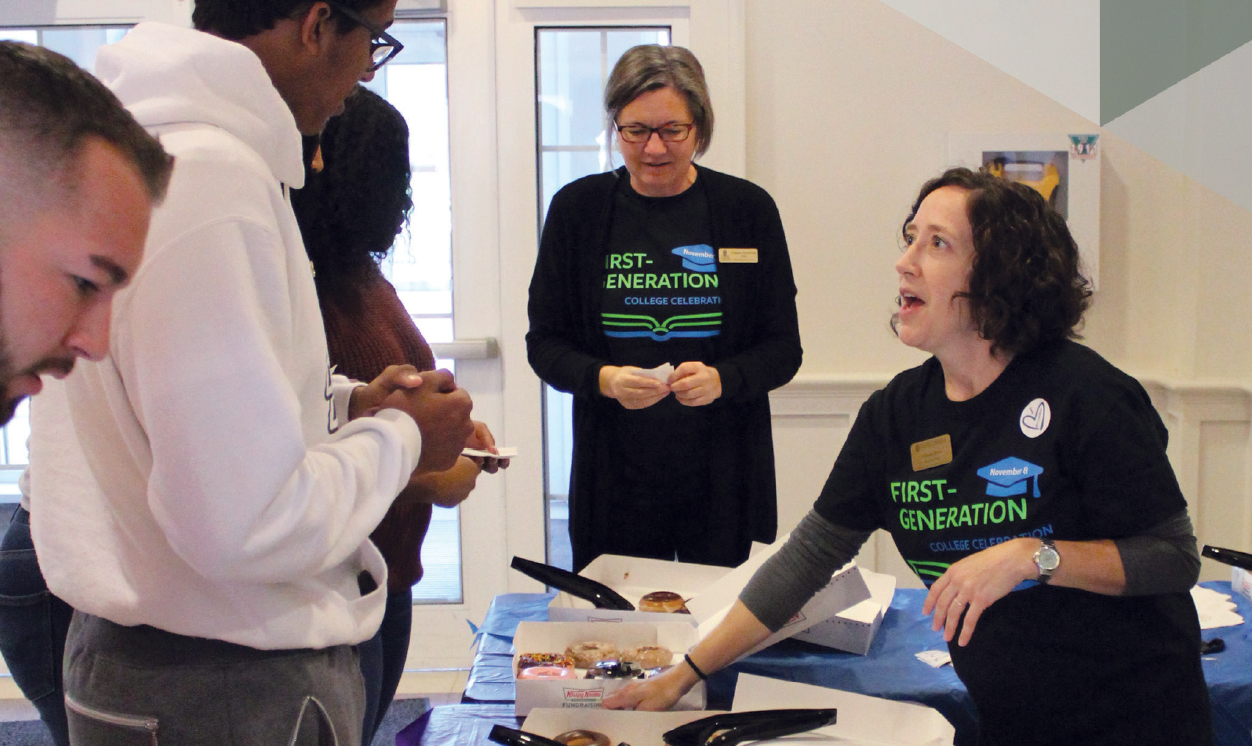 “We create visibility for them, because most of them don’t even know that they are falling into a particular category,” said Barnes, who is now also the faculty advisor for CCU First. “We try to make them aware that the things that can be difficult for them are not about them; they face many of the same challenges as other students do. Their parents just might not understand how to be supportive because they have not had a college experience.”

The first big visibility effort was Doughnuts with the Deans on Nov. 8, 2019, in recognition of National First-Generation Student Day. Bornholdt, Barnes, and other faculty members gathered in the atrium of the Edwards Building to hand out doughnuts, stickers, and brochures, and talk to students about what it means to be first-gen.

“It’s such a wonderful event because you get students who realize, ‘Oh, I’m first-generation! That’s me!’” Barnes said. “Students get so excited when they realize that others identify as first-generation. Then we are also in a position to tell their friends who are continuing-generation students that they are in a great position to be allies for first-gen students.”

The first Doughnuts with the Deans was such a success that it has become a standing event. Barnes and other members of the Edwards First Committee also host workshops on financial aid, scholarships, and other resources around the same time to help provide a roadmap for the trailblazing population.

“I have real gratitude that so many colleagues who, the minute they hear about this [first-gen] cause, do not hesitate to support it,” said Barnes. “The overwhelming response of support has been the only reason it has been a success, and that includes administrators, faculty, and staff. When we think about the importance of community and the feeling of not belonging as being one of the biggest obstacles for students, to see how the CCU community cares about first-gen students is really just one of the most inspiring things I’ve ever seen. It makes me grateful to be part of this community. This is something we really get right.

“We want students to know there is no shame in getting help. They can take pride in taking control of their education. It’s the most positive thing in the world. We are telling students they deserve to be here, which is why they’re here, or we wouldn’t have accepted their applications. Everything we offer on this campus really is for them, too, including all opportunities for success.”

Creating that sense of community is a big part of the CCU First student organization, whose membership grew to around 180 before COVID-19. Students can connect with each other and realize they aren’t alone in their experience, and together find the help they may need.

“Being able to connect with students, faculty, and staff who they know have a shared experience makes them understand that this is their community,” said Barnes, “that they do belong here. While trailblazing might be a bumpier path for some more than others, it does not mean you can’t go down the road just as far. They belong here, which is why we accepted them here. To have other potential obstacles in your path doesn’t mean you’re not as capable as anyone else. Sometimes you just need a map.”

In early 2021, the Beta Omega chapter of Alpha Alpha Alpha, the national honor society for first-generation students founded in 2018, was established by CCU First and the Office of Diversity and Inclusion. Due to COVID-19, the chapter wasn’t able to hold events or programming, but Aneilya Barnes, faculty advisor for CCU First, is hopeful to get things off the ground during the 2022-2023 academic year. Candidates for Tri-Alpha must have a 3.2 GPA on a 4.0 scale and have earned at least 30 credits toward a bachelor’s degree. Graduate students who identify as first-generation college students must have completed at least nine credit hours and have at least a 3.5 GPA.