Sunny Gupta ’92, namesake of the Gupta College of Science, leads one of the fastest-growing SaaS companies

For Sunny Gupta ’92, the decision to attend what is now Coastal Carolina University was driven solely by economics. The Chandigarh, India, native applied to a handful of universities in the United States, but only CCU offered him an academic scholarship. To help ease the financial burden even more, Robert Robinson, a former philosophy professor at the University, kindly provided Gupta a place to stay at his home in Aynor during his freshman year. The computer science major arrived on campus in Fall 1989 with $2,000 in his pocket, thankful for the opportunity to further his education.

Today, Gupta is the cofounder and CEO of Apptio, one of the fastest-growing software as a service (SaaS) companies. It builds advanced data and analytics applications that help technology leaders analyze and plan their technology spending so they can invest in products that increase the speed of business and deliver innovation. Founded as a startup technology company in 2007, Apptio is headquartered in Bellevue, Wash., with an additional 15 offices around the world.

“We offer CIOs and CFOs a series of software applications that help companies manage their technology budgets, spending, and benchmarking,” Gupta said. “Technology is pervasive. The world is going more and more digital. Everything is delivered by technology. It’s very, very hard for organizations of all sizes to understand what they spend on technology, how they optimize the spend, and how to plan better. That is what our software does.”

According to Gupta, there is $3.6 trillion spent worldwide annually on technology. He believes that spend amount will increase to $6 trillion in the coming years. Apptio manages about $650 billion of technology expenses and has recently expanded its international footprint in places such as Japan, Asia, Europe, and India.

Gupta, who lives with his wife, Prerna, and two kids in Kirkland, Wash., says Apptio went public in the Nasdaq market with approximately $550 million in capital in 2016. In January 2019, he led the company to its acquisition by Vista Equity Partners for approximately $2 billion. The deal was the largest IT private equity takeover in the U.S. that year and ranked 12th among all buyouts, according to PitchBook data. 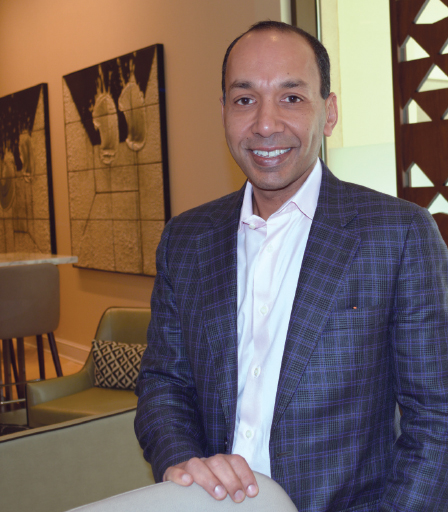 Gupta’s remarkable journey can be traced back to when the institution was known as the University of South Carolina-Coastal Carolina College. He had the opportunity to work in the computer science lab and the chancellor’s office; and he even served as a resident adviser his second year and was the president of the International Club.

He fondly recalls working for Ronald Eaglin, Ph.D., who served as chancellor from 1985 to 1992, and his administrative assistant, Nila Hutchinson. “It was a dream come true for me to be able to work for the chancellor. I worked in the office all three years, and felt like a part of their family. I remember driving Dr. Eaglin and members of the board of directors to Gamecock football games in Columbia. I used to get free tickets to the games. That is an awesome memory.”

Gupta’s experience in the classroom was just as memorable. He earned all A’s and just one C+ in a psychology class, and says, “That one class still haunts me to this day.” Subjects he enjoyed the most included world history, the Civil Rights Movement, philosophy, and, of course, computer science. One of his favorite professors was Sara Sanders, who taught English. He credits her for sharpening his writing and research skills.

“My education at CCU was a huge stepping stone for me,” Gupta says. “The University gave me a broad liberal arts education that included computer science, math, philosophy, and English. After graduating from Coastal and going into the real world, you are competing with people with degrees from schools such as Duke, Pennsylvania, and Stanford. The first five to 10 years of my career, I used to feel intimidated because most people were not familiar with USC-Coastal. There was something special about that; it gave me more motivation. I feel proud to represent Coastal, and I hope to make the University proud.”

Indeed, he has. Prior to founding Apptio, Gupta was executive vice president of products at Opsware, responsible for all product businesses until Opsware’s acquisition by HP in 2007. He was also the cofounder and CEO of iConclude, which pioneered the IT runbook automation market through its acquisition by Opsware. He previously held senior leadership positions in products, business development, and engineering at Mercury Interactive, Rational Software, and IBM.

In addition to his professional success, Gupta is financially giving back to his alma mater. In July 2019, he made a major donation to the University’s College of Science. The gift, one of the largest ever received by the University, provides financial resources and student scholarship support for the college. In recognition of his generosity, the college was renamed the Gupta College of Science.

“I could have never envisioned this for myself and my family,” Gupta said. “I am grateful and humbled. A lot of great people helped me along with the way. More importantly, I am still focused on the fact that my work is not done. I am very dedicated to scaling Apptio as a business for the next three to five years. We really believe our best days are ahead of us.

“Education is very important to me. I want to provide resources to my alma mater and support Coastal students who want to work hard but may not have the financial resources to earn an education like I did. I received a lot of scholarship support from Coastal. If I didn’t have that option, I would not be where I am today. Apptio’s second largest office is in Raleigh, N.C., so we hope to attract a lot of great Coastal students who are looking for job opportunities.”