For nearly 50 years, Cliff Ellis has been coaching and mentoring young men while racking up victories on the hardwood court. The 2021-22 campaign marks his 15th season as the head men’s basketball coach at CCU, where he boasts an overall record of 264-189.

Prior to being named the Chanticleers’ head coach on July 2, 2007, Ellis successfully directed the men’s basketball programs at Auburn, Clemson, and South Alabama. He entered the 2021-22 season with 876 career victories, 798 of those as an NCAA Division I coach. Only 124 D-I men’s basketball coaches have tallied at least 500 wins in their college coaching career.

“Coach Ellis has compiled one of the most consistently successful careers in the history of the game,” said Matt Hogue, CCU’s vice president for intercollegiate athletics and University recreation. “Championships at five schools and one of only a few coaches to guide four schools to the NCAA tournament. His longevity and contribution to college basketball speaks for itself.”

Ellis is on the brink of becoming just the fourth active D-I coach to reach the 800-win plateau. His impressive coaching success places him among elite company. Duke’s Mike Krzyzewski has 1,170 victories; and, only two other active Division I coaches – Jim Boeheim of Syracuse (982) and Bob Huggins of West Virginia (900) – have earned 800 wins in their careers.

“We are all friends,” Ellis said. “And, we have been at it a long while. We’ve all played against one another, and have spent time together in the offseason. For me, I don’t get caught up in the numbers. It’s a reflection of the people you surround yourself with. The players that you’ve had, the coaches that you’ve had.

“To have longevity, you can’t be made of plastic. Because plastic breaks. If you are able to last in this game, there is something real about the person. For me, the reality of everything comes down to working hard, committing to the task at hand, and having great people around you. It’s an honor to be recognized with those coaches.” 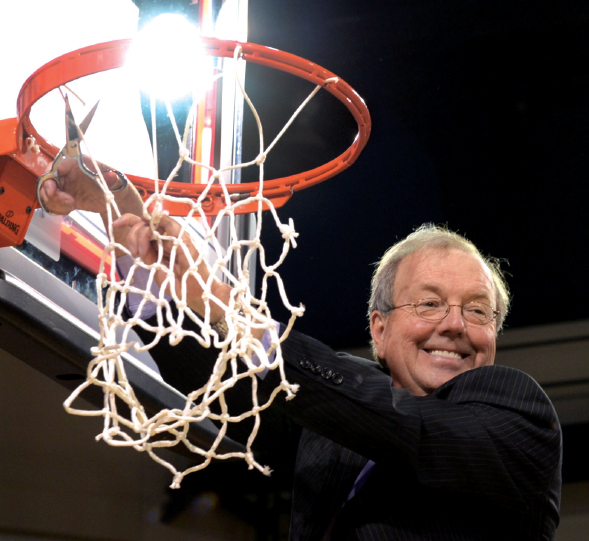 Coach Cliff Ellis is in his 15th season as the Chanticleers’ head men’s basketball coach.

With Ellis at the helm, the Chanticleers have won two Big South tournament championships, advanced to a pair of NCAA tournaments, and played in two CollegeInsider.com and three College Basketball Invitational (CBI) postseason tournaments. The 2009-10 and 2010-11 teams each tallied a single-season school record 28 wins and advanced to the National Invitation Tournament. His CCU win total ranks only behind Russ Bergman’s 306 victories that were recorded from 1976-1994.

“Continuity is valuable to a program, and Coach Ellis’ impact to our program has provided stable leadership, multiple postseason appearances, record-breaking seasons, and an unwavering commitment to his student-athletes,” Hogue said.

In 2020-21, which was disrupted by the COVID-19 pandemic, Ellis led the Chanticleers to their best season since joining the Sun Belt Conference. The Chants finished 18-8 overall and 9-5 in the conference. For the first time since joining the Sun Belt, CCU played in the conference tournament semifinals before losing 64-61 in overtime to eventual tournament champion, Appalachian State. The Chanticleers finished the season as the runner-up in the 2021 CBI.

Coach Ellis has compiled one of the most consistently successful careers in the history of the game.”
—Matt Hogue
CCU’s vice president for intercollegiate
athletics and University recreation

“Now that we are in the Sun Belt Conference, we have had to grow as an athletic department,” Ellis said. “When you look at the coaches who have come into our programs, they do it because they love it. It’s not about the money; it’s about the love of the game. I don’t have to do this, but I do it because I love it.”

During his 47-year coaching career, Ellis has guided his squads to 10 NCAA tournaments and 13 National Invitation Tournament bids. His teams have advanced to the NCAA Sweet 16 three times: Clemson (1990) and Auburn (1999 and 2003). And, he is one of only 12 coaches in NCAA Division I history to lead four different institutions to the NCAA tournament and is the only coach to have at least 170 wins at four different D-I programs.