A Place to Entertain and Educate 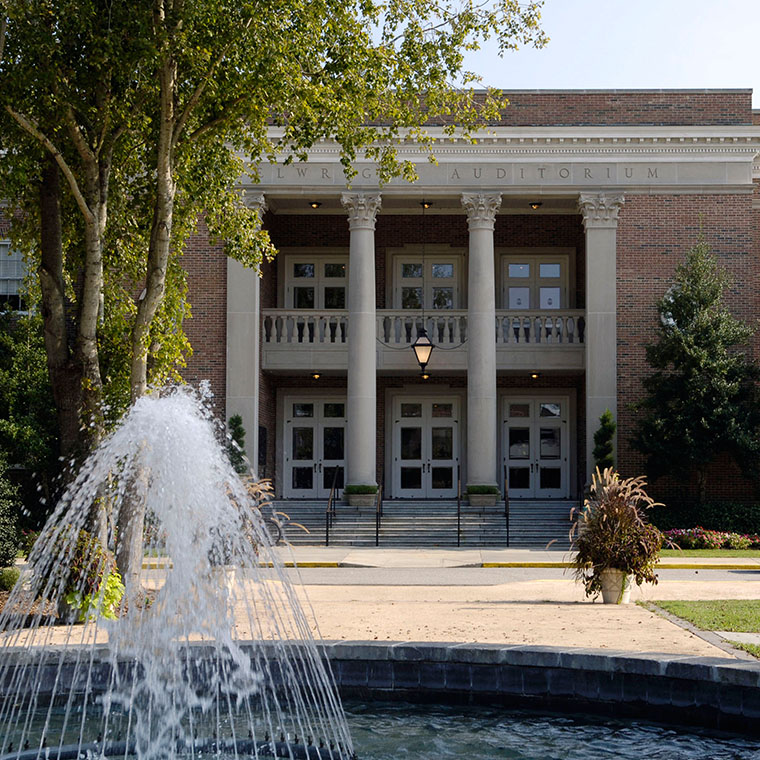 ABOVE: Ground breaking for Wheelwright Auditorium occured in 1979. When the below article was written in 1996, the facility had already distinguished itself as a Grand Strand performing arts destination.

A Place to Entertain and Educate

* This article appeared in the Fall 1996 issue of Coastal Magazine

Assessing the past, present and future of the performing arts at Coastal Carolina, President Ronald Ingle delineates two benchmarks: the opening of Wheelwright auditorium and, more recently, the burgeoning entertainment industry in Myrtle Beach. “With Wheelwright Auditorium, Coastal Carolina assumed a singular status as a cultural center for our students and the region,” said Ingle.

“Throughout the 1980’s, Wheelwright distinguished itself as the preeminent venue for professional dance, music, opera and theater in the Waccamaw region. In the 1990s, with the appearance of numerous Myrtle Beach concert venues, Coastal Carolina has refined its cultural mission. Specifically, Wheelwright Auditorium features performances which combine entertainment and educational values. In recent years, we have sought to ensure that professional artists performing in Wheelwright have contact with students through seminars and workshops. In the years ahead, I foresee internship opportunities for our music and theater students and programs that are distinctive of and necessary to a university,” Ingle said.

The ground breaking for Wheelwright Auditorium occurred on Tuesday, June 5, 1979, with Chancellor Edward M. Singleton and John K. Massey Sr. presiding. Massey led the Campaign for Progress which raised monies to meet a $1 million challenge gift by Mrs. William Kimbel for the construction of a performing arts center on the campus. Massey told the gathering that “when the final stage of the campaign is complete and the construction of Wheelwright is finished, our section of the state will have its first center for the performing arts. We believe the construction of this facility will begin a new era of cultural development in the Grand Strand/ Waccamaw community and we at Coastal Carolina College are pleased to have a role in this new achievement.”

In succeeding years, Wheelwright has presented a stellar array of performers who have realized the dream of Wheelwright as a center of the performing arts in the Waccamaw region: for instance, the Charlotte Symphony Orchestra, the Westminster Choir, the Norman Luboff Choir, the Prague Symphony Orchestra, and many others. The continuing vibrancy of Wheelwright can be measured by sold-out performances of the St. Petersburg Ballet, the Four Freshmen, and Kimbel Distinguished Lecturer Terry Anderson during the 1995-1996 season.

Robin Edwards Russell, chair of the Wheelwright Council for the Performing Arts, said, “To maintain the proud place of Wheelwright Auditorium as an indispensable university resource, we must not allow the building to deteriorate. The very success of Wheelwright in attracting large audiences has exacted a toll on the seats, carpeting and walls. Moreover, we must look to assuring ready access to the auditorium for the disabled,” she said.

President Ronald Ingle affirms the significance of Wheelwright as a focus of the performing arts and cites an upcoming fund-raising effort to refurbish the building’s interior. “In the 15 years since Wheelwright was built, no other venue in Horry County has provided so many and so varied programs that entertain and educate,” he said. “I do not see the expanding cultural offerings on the Grand Strand as competitive. Rather, I believe that the vision which motivated and has enlivened Wheelwright has played a role in the growth of the local entertainment industry,” Ingle said.

Ingle confidently predicts that the community will again come forward to sponsor the renovation as it did in subscribing to the construction costs in the 1970’s.

This is the Wheelwright Auditorium schedule from the 1996-97 academic year.