In the Fast Lane

Marketing in higher education is changing at a fast pace. Capitalizing on prevailing technology and behavioral trends, universities are concentrating more and more on digital strategies to hit key audiences and attract the best students. While Coastal Carolina University has fully embraced new media, the search continues for other creative marketing avenues outside the digital realm. In 2015, CCU began a partnership with one of its own students to blaze a new path in college marketing.

“My Pop-Pop had this little go-cart in his yard, and I would drive the thing for hours and hours until it ran out of gas. Then we would fill it back up and I would do it again.” That 6-year-old childhood moment, recalled recently by Coastal Carolina University student Brandon Brown, now 23, is the origin of his ascent to the second highest circuit in NASCAR.

From go-cart joyrides on his grandpa’s property, Brown, a senior communication major, has risen to racing vehicles capable of reaching 200 mph on some of the most iconic racetracks in America—and introducing CCU to a whole new audience.

Growing up in Woodbridge, Va., Brown began go-cart competition at 10 years old, and by the time he was 12 he was competing nationally. At 16, he switched to late model stock cars, racing at tracks in Virginia and North Carolina through his high school years. His father, Jerry Brown, recognizing his son’s talent, passion and long-term commitment, established a professional team to support his career, Brandonbilt Motorsports.

By 2015, when he transferred to CCU from Northern Virginia Community College, Brown was racing in the NASCAR World Camping Truck Series, having skipped the K&N (formerly Busch) Pro Series East, the traditional “next step” on the ladder for aspiring drivers. Born to Run: No. 86 Chevrolet Silverado (above) introduced Chauncey to NASCAR.

However, despite the level Brown has reached at a young age, competing on racing’s biggest stage comes at a cost. Funding a team of up to 10 people, traveling to races and purchasing safety equipment barely scrape the surface of the financial obligations NASCAR drivers face. For Brown and the Brandonbilt brand to be competitive, they needed a sponsor. But it was easier said than done.

“For every ‘yes’ we would get a thousand ‘nos,’” says Brown, a senior communications major at CCU, noting that the initial sponsors who did sign on could only offer minor assistance. “We were looking for that first title sponsor to really help us take off.”

Then one day, Bill Plate, CCU’s vice president for university communication, was scrolling through Twitter. While browsing tweets containing a CCU-specific hashtag, he saw something that immediately froze his thumbs.

After some research, Plate discovered that Brown had recently transferred to Coastal. A racing fan himself, Plate became acquainted with the inner workings of NASCAR on his first job out of college. His employer was a major sponsor of the circuit, giving Plate the chance to work behind the scenes at races and learn about the lucrative advertising and marketing possibilities afforded by NASCAR. Plate felt that this was something that could benefit Coastal. “We need to be open to opportunities in markets we might have never considered before.”

Plate met with Brown the week after stumbling upon the tweet. “I wanted to find out if we could start a mutually beneficial relationship, primarily on social media,” Pate says. “But after finding out the type of person and brand ambassador that Brandon is, I knew there was potential for an even bigger opportunity.” Plate felt the time was right to make a big move. 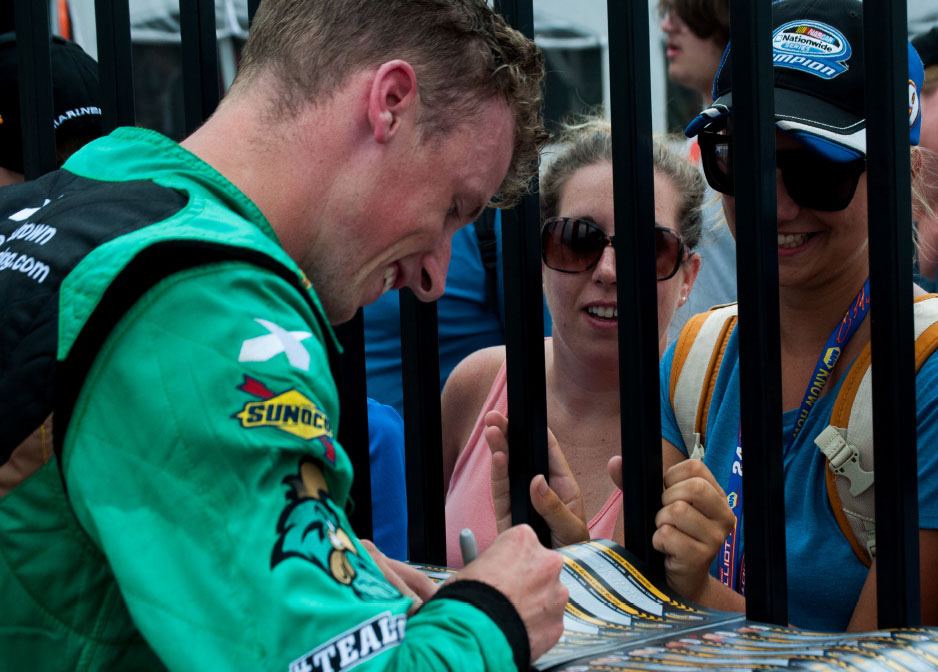 Several of the world’s biggest brands are associated with NASCAR, but, except for the occasional single race sponsorship, higher education was largely absent. While many university administrators might shy away from shattering the mold, Plate developed a comprehensive sponsorship package, which Brown signed in April 2015.

With a sponsorship secured, Brown celebrated by notifying the general manager of Brandonbilt Motorsports. “I called my dad and said, ‘You are never going to believe this, but check your email.’”

Now wrapped in Coastal Carolina branding, Brown’s No. 86 Chevrolet Silverado truck immediately attracted the notice of television cameras and spectators. The attention seemed to inspire Brown. He raced well in numerous events, including a performance that amazed the NASCAR community when he finished in fourth place in the 2016 NextERA Energy Resources 250 at Daytona International Speedway.

“Coastal was the turning point for me,” says Brown. “It wasn’t necessarily the amount of money that CCU invested in the program, it was the support and presence that made the difference.” Brown says that Coastal’s involvement has helped to open the gate for other sponsors.

For Coastal, the benefits go far beyond having a brand ambassador at the biggest NASCAR events.

“It is no different than a billboard, except that this billboard moves up and down I-95,” Plate says, referring to the trailer marked with Coastal insignia that transports Brown’s vehicle along the East Coast to various NASCAR venues. “Then, on race day, it’s a billboard that goes 180 miles around a racetrack on national television. It is tremendous exposure.”

Brown’s career is on the rise. He jumped from the World Camping Truck Series to the Xfinity Series in 2016, racing on legendary tracks such as Bristol Motor Speedway and competing against drivers he used to watch from his living room. “I would get to these tracks and the only time I had raced on them before was in video games,” Brown confesses. “The first two seasons I was a little starstruck. You see these big-time racers who you used to watch on TV and now you are strapping in with them.”

Brown placed 20th in the Darlington Xfininty Series race during the 2017 Labour Day weekend. His performance was all the more impressive because the drivers who finished ahead of him were with cup-affiliated teams. Brown’s ultimate objective is to take one final, big step. 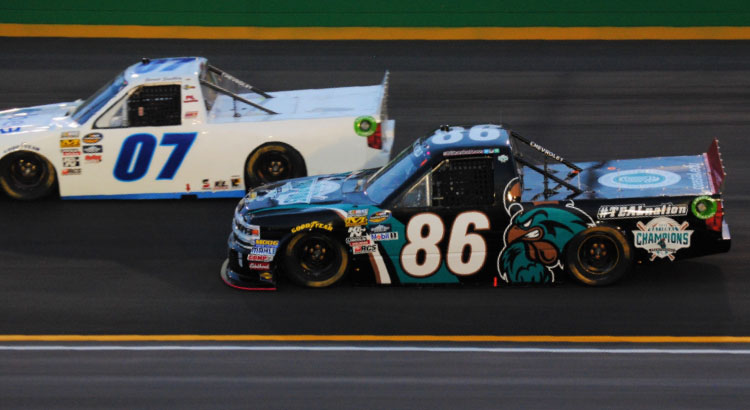 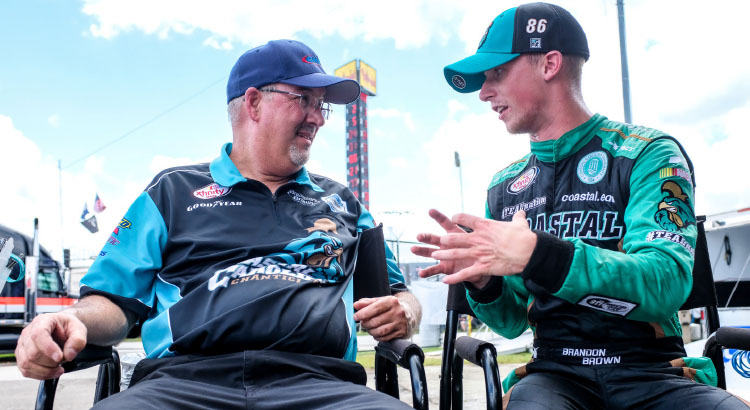 Get an inside look at Brandon Brown Racing.

Send in the Clown »