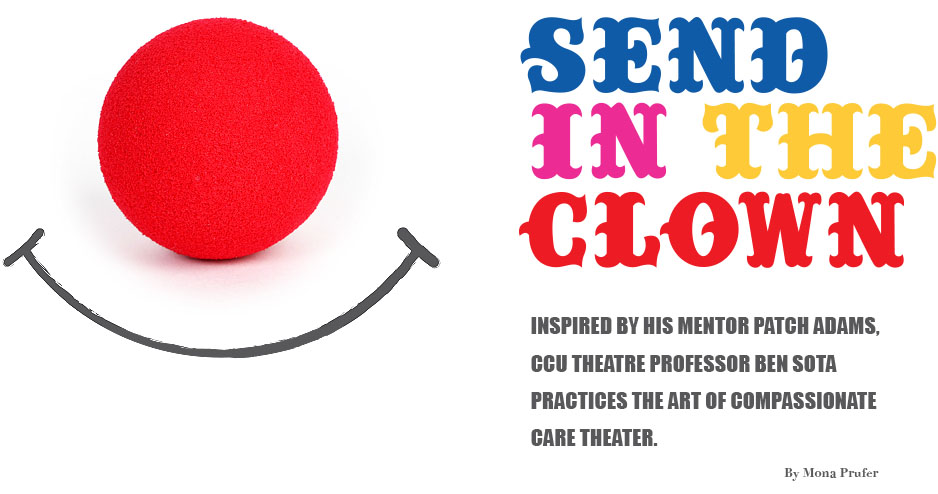 Making people laugh can be a serious matter. Ben Sota of Coastal Carolina University’s theatre faculty is a veteran clown who traveled to Guatemala earlier this year for an unusual spring break.

For eight days in March, Sota was one of a troupe of about 30 clowns who took part in his friend Patch Adams’ 18th annual Alternative Spring Break trip to Guatemala City, where they performed for sick children, the disabled, the elderly and others with serious handicaps and illnesses.

“We performed for more than 500 kids with cerebral palsy and Down syndrome, and oh, they were the best audience,” says Sota. “There was so much joy!”

Traveling by bus from town to town, the Patch Adams troupe partnered with a Guatemalan volunteer organization called Fabrica de Sonrisas (Factory of Smilemakers). The trip offered an opportunity for Sota to put into practice an approach to theater that he has been developing most of his professional life—an approach that Adams pioneered.

“In traditional theater, the audience watches the performer on stage,” says Sota, who heads up the physical theatre track in Coastal’s BFA program, the only program of its kind in the country. “But in compassionate care theater, there is a reversal of roles. The sick person becomes the performer. You put yourself in their body; you focus on what interests them. It’s a shift of focus that’s really a lesson in empathy.”

In Guatemala, Sota played tag on his unicycle with children who had survived an orphanage fire. He used his clowning skills to encourage a handicapped child to walk. He brought smiles and laughter to terminally ill dialysis patients.

The weeklong trip was funded by a CCU professional enhancement grant. Sota’s goal is to explore the intersection of theater, health care and social justice in ways that celebrate the “personhood” of each individual, regardless of physical or cognitive limitations.

“The work creates connectivity, lightness and joy in centers where sadness, trauma and boredom often reside,” he says.

Sota says that much of the energy and the laughter in Guatemala was supplied by Adams. A legend in the concept of humor and play as major components in the healing arts, Adams founded the nonprofit Gesundheit! Institute in 1971 to further his ideas about holistic health care. He was the subject of the eponymous 1998 film starring Robin Williams that made him, and his philosophy, world famous.

“The movie doesn’t do him justice,” says Sota. “Patch built a school in Guatemala City and is raising funds for two more floors. He doesn’t stop. At the dialysis center, he made a contest out of which patient had the smelliest feet. He even made a stop at a fast food place an event, entertaining the employees with gags. For Patch, the clown is an outside-the-box entity of compassion and love—love in its purest form, love toward community, toward health and healing.”

Education of a Clown

Sota grew up in Pittsburgh in a household that nurtured creativity and the arts. His parents were musicians, and his grandfather was a talented amateur circus enthusiast who taught 12-year-old Sota the basics—trapeze arts, juggling seven balls, riding a unicycle. Although he started out as an architecture major, he knew that his true calling was to perform. He began writing and producing shows that incorporated the minimalist, European style of clowning that interested him.

Sota met Patch Adams for the first time in the late 1990s when they were both instructors at Camp Winnarainbow, the performance arts camp in northern California founded by the social activist and comic Wavy Gravy. As director of aerials, Sota taught young people skills like flying the trapeze and walking the tight wire.

In 2002, Sota started his own show, the Zany Umbrella Circus. He traveled the country, pitching his tent at parks and fairs. Based partly on the ideals of the traveling Chautauqua schools of the early 1900s, Sota’s circus has always emphasized education as part of its mission.

Beginning in the mid 2000s, the Zany Umbrella ensemble was much in demand. Sota and his troupe performed at the White House for the 2005 Congressional Picnic and at Central Park’s Summer Stage. They traveled to post-Katrina New Orleans in 2006 to provide comic relief to the stressed survivors, and to war-torn Kabul, Afghanistan, in 2007 to clown for children there. The circus has also performed in Jordan, Ethiopia, Italy and Hawaii. 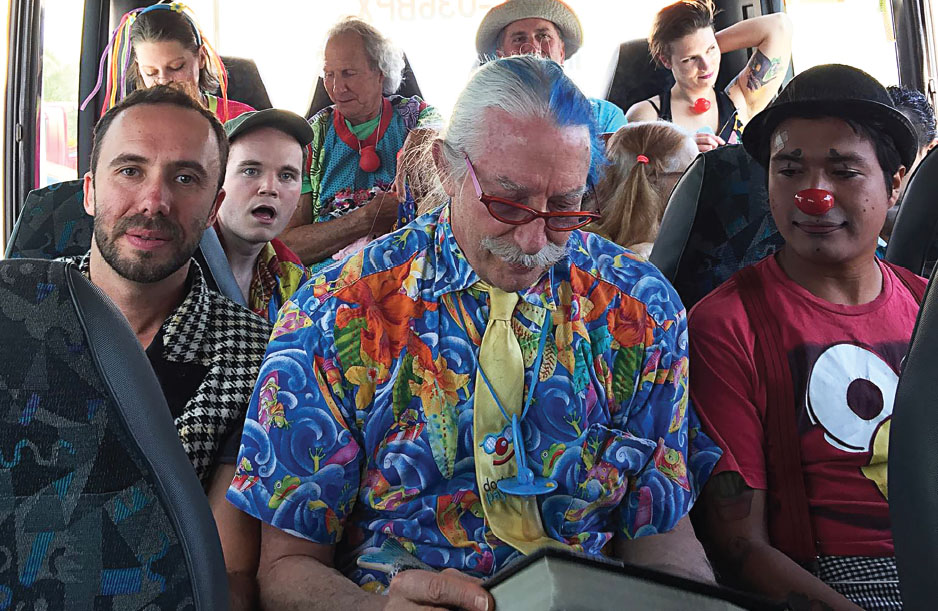 On the Road with Patch:  Ben Sota (left) and other compassionate clowns traveled by bus to hospitals, orphanages and care facilities in Guatemala ‌with the famous Patch Adams‌ (center).‌

In the midst of all this clowning, Sota did take time out to earn a few degrees. He earned a BFA from the University of Pittsburgh and won a Jacob K. Javits Fellowship from the U.S. Department of Education that enabled him to pursue two MFA degrees—one in directing from the University of Hawaii and one in physical theatre from the Accademia dell’Arte in Tuscany, Italy. CCU’s Department of Theatre has a longstanding academic partnership with the Accademia in Italy, which is how Sota made the connection to Coastal. He joined the faculty in 2014. 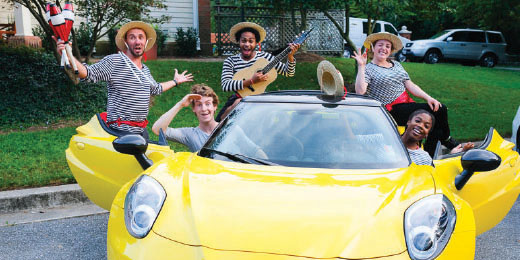 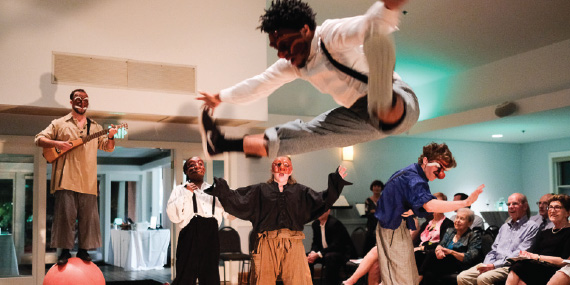 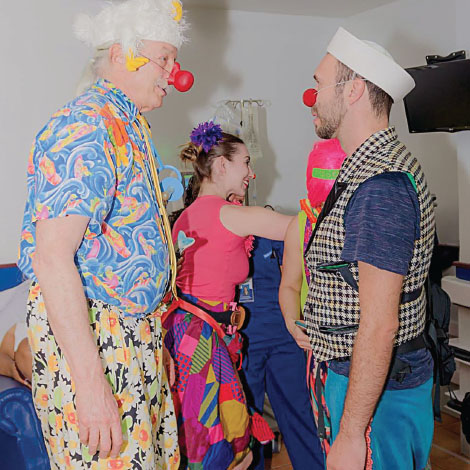 Now he is intent on training the next generation of physical theatre performers and drawing their attention to the special opportunity they have to deliver social justice and compassionate care.

“The clown exists in every culture of the world,” says Sota. “With clowns, normal rules of social interaction are suspended; clowns can just do and be. There is a tremendous power in this, because it allows them the latitude to question anything and everything. There’s an old clown proverb—the shortest distance between two points is laughter.”

Already the graduates of CCU’s physical theatre program are making their mark. Peter Seifarth ’17 is conducting research on theater in Nepal during the 2017-2018 academic year as Coastal’s first student Fulbright scholar. Stephen Craig ’14 worked for Ringling Bros. Barnum and Bailey Circus until it closed in May 2017.

Sota is now planning to form the first university Compassionate Care in Theatre (CCIT) group in the United States this academic year, giving students the opportunity to explore Sota’s performance model in area care facilities. His greatest hope is that his students might have the opportunity to experience and work with Patch Adams, who is now in his 70s. Sota is working toward taking a group of students to Adams’ spring event in Guatemala in 2018.

This would be a wonderful way to pass the torch on to the next generation,” he said. “ I know that Patch has reaffirmed what is important in my life and how I should be spending it.”

In the Fast Lane »