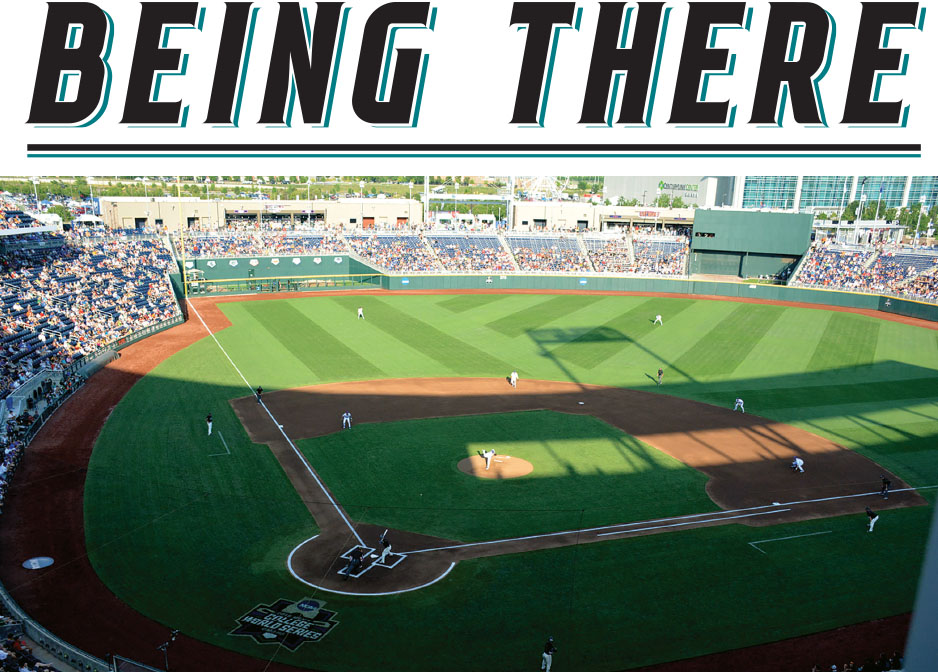 Many Coastal Carolina University alumni were lucky enough to travel to Omaha in June to witness the Chanticleers’ finest hours at the College World Series. Here are a handful of memories they shared. 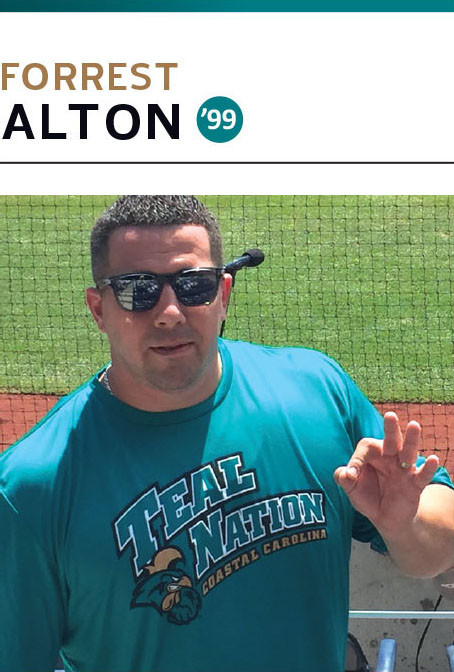 I said over and over leading up to the College World Series’ final three-game tilt that if Coastal was in, I would go. I arrived on Wednesday morning. Without a doubt what I will remember the most are the people, the amazing number of Coastal fans and alums who made the trip, and the way that Coastal was the “adopted son” of Omaha for the series. Just walking around, you saw the Coastal footprint everywhere. Banners waved outside the stadium, passersby almost always greeted each other with a “Chants Up,” and the stores with “We have teal!” signs in their windows sent a clear signal about what was the hottest color of the week. Oh, and being there on Thursday in person when the confetti fell. Yeah, that was pretty special too... #ChantsUp

Photo: Forrest Alton, former Alumnus of the Year, gives the Chants Up sign. 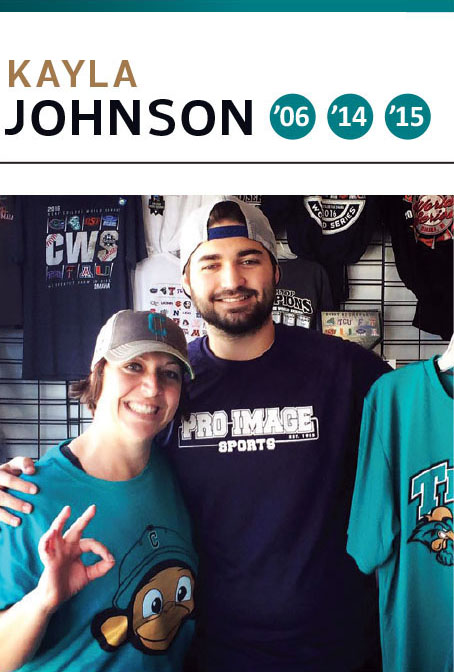 On Tuesday morning, I was walking through Fan Fest after taking the stroll to the Nebraska/Iowa state line on the pedestrian bridge. I had on my teal Fiki shirt when a vendor called out to me and said, “Good morning, Teal Nation! Happy Teal Tuesday!” It was such a surreal moment. How do the folks in Omaha know about Teal Tuesday? Howie Brewer with Pro Image Sports provided just one example of how “Feel the Teal” was becoming infectious! The Omaha community embraced the culture of the Chanticleer family by learning and carrying out our traditions. We are relentlessly and unapologetically the Coastal Carolina University Chanticleers! 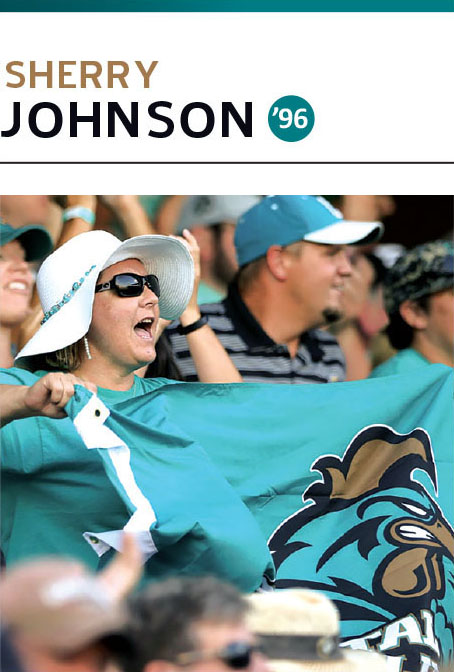 As an alumna and former Coastal Carolina University student-athlete, I do not know where to begin in sharing my enthusiasm about attending the College World Series games in Omaha! From the way the city embraced the visiting teams to the comradeship among the CCU alumni, I will forever cherish this history-making moment. As a Chanticleer Hall of Fame athlete, I have never been more proud to be a part of Teal Nation and share in this momentous capstone event! I always had faith that our “diamond in the rough” team would come out on top! It was an unforgettable moment. I’m proud to be a Chanticleer!

Photo: Sherry Johnson cheering and waving the Chanticleer flag at the CWS in Omaha. 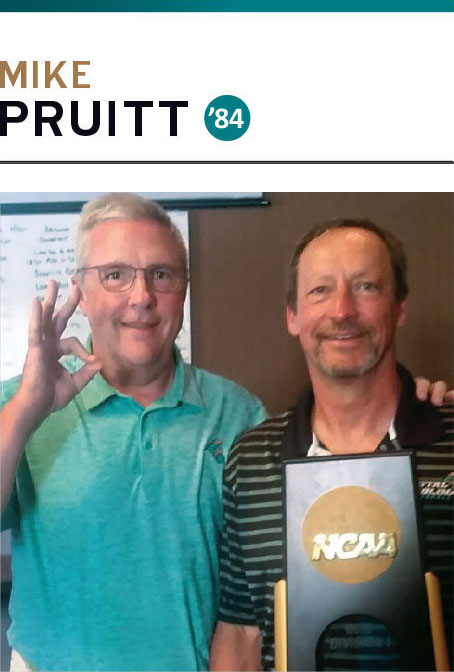 My best lifelong memories from Omaha were watching us beat Florida on Father’s Day with my daughter, who also is a CCU graduate. I also enjoyed connecting with former players and realizing what an incredible bond we shared in having worn the CCU baseball uniform. What made this even more special was that my three Coastal roommates came for the finals. The support of Teal Nation in Omaha and via social media brought a sense of pride like nothing I’ve ever been a part of. I became very close to this group of kids and many of their parents, which made being a part of this journey even more special. Lastly, Coach Gilmore is like my brother, and to see the emotional joy in him for what they accomplished is something I will cherish forever. #chantsforlife 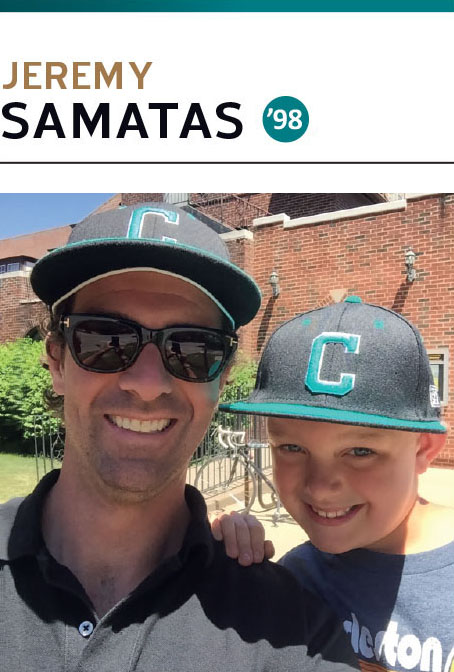 As a former player, there is so much pride when you put on that Coastal hat and watch the next generation play the game. I took my son Tayber to the games, and we drove seven hours from Chicago. Tayber and I spent our entire second day looking for a special shirt from the series. We searched every tent outside the stadium, and all we kept hearing was that the Coastal gear was flying off the shelves. The coaching staff was able to get me a hat for him. The coolest moment for us was taking Tayber to Coastal’s off-day hitting practice. The players were local celebrities, and they took the time to talk, sign autographs and tell stories. I could hear Tayber in the back seat pretending he was Remillard and then Marks coming up to bat. His hat never left his head the two days we were there. My trip to Omaha for the 2016 College World Series is something I will treasure forever. I had the opportunity to watch the championship series with two of my best friends, fellow alumni Matt Ensworth and Trip Ritter, and oldest son Gray. My favorite memory happened prior to game 2. I purchased a baseball for my son Gray to have autographed by the Chanticleer baseball players. As we were walking toward the stadium, he said he wanted to “play catch.” We found a small grassy area just outside of the stadium and threw the baseball for 10 or 15 minutes. It was a moment I will never forget. 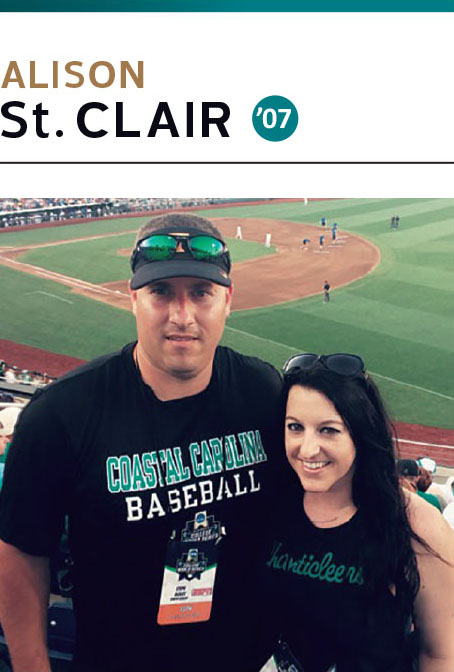 The College World Series is an experience that will deepen your love for baseball. I was lucky enough to convince my twin brother to book a flight for the first game. Attending Omaha for the CWS was a bucket list experience for both of us. Beating Florida, the No. 1 seed, made the trip worth every penny. I flew back home to D.C., but when Coastal forced a game 3 against Arizona, I knew I had to get back to Omaha, and I booked the next flight. Weather moved the championship game to the next day, the same time my return flight was scheduled! There was no way I was going to miss that game. I spent the rest of the night trying to find a new flight. It wasn’t cheap, but I could never put a price tag on getting on the field to celebrate winning our first national championship! 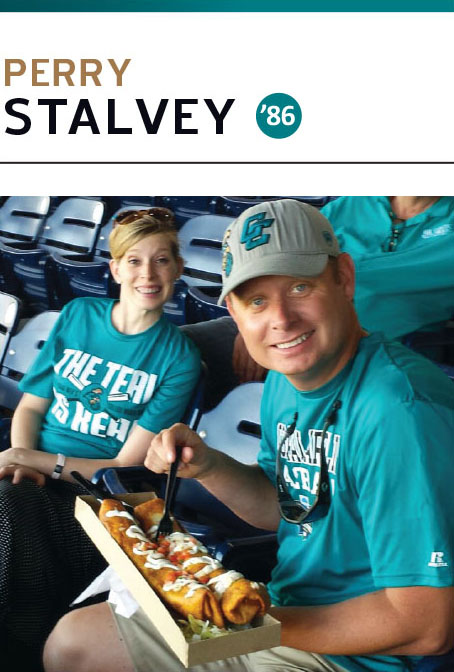 There is no doubt witness-ing the Chanticleers win the College World Series is the greatest sport event I ever witnessed in my life. I am still pinching myself. I have to admit, I had tears in my eyes when the final out was made. Every time I am coming through Conway back to Myrtle Beach, I drive by the entrance to the baseball stadium and look at the championship banners just to make sure I’m not dreaming. I enjoyed the game with my brothers Wayne and Eric, who both attended Coastal, and my son Perry, a 2010 CCU graduate. By the way, my brother Wayne played on one of Coastal’s first baseball teams. He is 70 years old and agreed that the CWS was the greatest sports event of his life.

Photo: Perry Stalvey (right) enjoys a taquito at the CWS.