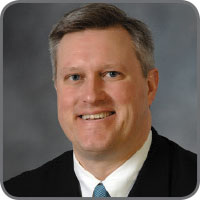 Matt Hogue, CCU’s director of athletics since 2013, began calling baseball games for the Chanticleers after he joined the CCU staff in 1997, just a year after Gary Gilmore became head coach. His close involvement with the baseball program over the past two decades gives him a unique vantage point to assess the meaning and impact of the unprecedented College World Series win. Hogue took some time in the wake of the victory to discuss its impact with Caroline P. Smith ’08 of CCU’s Office of University Communication.

Smith: You said that making it to Omaha was immeasurable in terms of impact for the University. Now that we’ve had time to sit back and process everything, what are some of those impacts for the University as a whole?

Hogue: It fuels the University’s trajectory. It will increase applications. It has galvanized our external stakeholders, alumni and the community. I’ve never seen the kind of response from fans, community and alumni that I saw after this. It blew away my expectations. There was something kind of mystical about getting back to the airport and seeing all these fans piled up against the fence. When I saw that, I felt to a large degree that we had finally arrived. There’s no question that it’s taken that affinity for the University by those stakeholders to a whole other level. Long term, it becomes imperative on our part to ask, “How can we capitalize on this? How can we bring even more people under the tent? How can we make the most of this in the crucial areas of giving and fundraising and support?” That’s really the job we are now undertaking. We have to utilize this great moment to create and foster more great moments, in athletics, academics, community involvement and other areas.

Smith: You’ve said in the past that athletic programs provide a “portal” into the University as a whole. How does this win widen our portal?

Hogue: The potential is huge. This past summer was a perfect storm for us. In addition to the College World Series, there were national stories about Dustin Johnson, Amber Campbell, Josh Norman—we’ve had a tremendous stretch of success. I think it speaks to the impact and the power the institution is starting to have, not just locally or regionally, but across the country. We have a unique ability to reach a lot of people in a very short period of time. That’s a big part of what athletics can do for an institution. If your athletes are performing well, people start getting very curious about your school, especially in today’s information age. They start spending more time on your website and on your social media channels. It entices that superior prospective student to say, “Hey, that place is happening, it’s vibrant, it has a buzz. That’s where I want to go to school.” On another level, athletic success may arouse interest in areas we never thought of. It may create a stronger perception when our grant writers go out to find money for research projects. It may open a conversation on the other side of the country just because someone happened to watch the College World Series. Athletics is a small percentage of the University, but it’s a major vehicle for awareness and communication.

Smith: How does this legendary win reflect the character of CCU?

Hogue: President DeCenzo has described it as a special kind of resiliency. From the day Coastal Carolina was founded in the ’50s, it has been an against-the-grain, underdog approach. That’s how we started. A lot of people put reputations on the line and did things they were told they couldn’t do or shouldn’t do, but they pressed forward. That is the DNA of Coastal. We press forward and accept the next challenge. We don’t just go away because someone says “you can’t do that.” This place would have never survived had our founders taken that attitude. It would have never survived if we didn’t have a group of individuals who thought that we would thrive as an independent institution back in 1993. Each time there has been a milestone, a moment of history for this University, we’ve faced detractors and adversity, and we’ve been resilient. There were people who thought we were crazy to add football, and here we are 13 years later moving up to FBS. That’ll be another challenge we have to prove some folks wrong on. There were some folks who thought we’d never offer a doctorate degree. I get a little bit frustrated looking on the outside in at how we get scrutinized the way we do. Because our track record is a blue chip track record when you consider how quickly we’ve provided educational opportunities for our region and beyond, especially considering that we haven’t had a lot of resources flowing in from external sources. That’s the essence of this place.

Smith: What impact does this have on the baseball team itself? On current players, coaches, future players, alumni?

Hogue: The biggest impact is recruiting. We’re going to get through doors so much easier now than we did before. Our coaches can look recruits in the eye and say, “you can win a national championship here’” and it will be a factual statement. There aren’t a lot of programs that can do that. Another important aspect is affinity. One thing that was really meaningful was the outpouring of support from former players, a lot of them who had played for Gary. It gave them something to reconnect and bond over. That will pay a lot of dividends down the road because they all felt “we were a part of building that.” So much about being successful in athletics is the personal belief and the confidence that you can get it done. Our players coming back, they understand what the journey is now. They understand what it requires to play in that environment against teams like LSU. Coaches can coach for a very long time and never get that type of experience. It develops such a high degree of confidence. There’s no unknown anymore. You still have to play well, and the coaches have to get the best lineup on the field, none of that changes. But a lot of teams that have broken through and made it to the CWS tend to get back a lot faster, though maybe not the very next year.

Smith: On a personal note, can you describe how it felt to assume your “Voice of the Chanticleer” role in the last half-inning? When you said that “so much is riding on this next pitch,” it meant much more than just winning the game.

Hogue: When I called it, I probably wasn’t thinking as much about the deep significance. You could probably go back to a Big South Championship I’ve called where I said something similar. But you’re right. It was one of those moments where we were either going to be the team that came really close or the one that became immortal by winning a national championship. I guess now that you put it that way, it ended up being the appropriate words. I’ve never gone into broadcasting a game trying to figure out what I’m going to say or how am I going to describe “X” if it happens. But sometimes you hit it on the money.