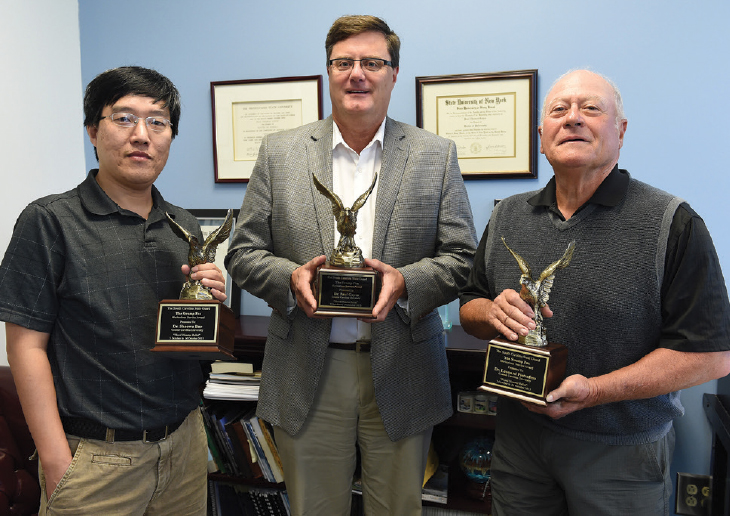 A team of scientists at Coastal Carolina University received the Swamp Fox “Patriot Award” for exceptional service during a state natural disaster from the South Carolina State Guard for their contribution to relief efforts during the statewide flood event in October 2015.

Shaowu Bao, Len Pietrafesa, Bryan Keller and Paul Gayes of CCU’s School of Coastal and Marine Systems Science (SCMSS) were recognized at a ceremony at the South Carolina State Armory in Columbia on Nov. 7 for providing technical assistance to state emergency management personnel during the flood.

The team created computation and numerical data and offered advice and assistance to the S.C. Military Department and its emergency management agency during the period of the flood, Oct. 3-14. Members of this team are also responsible for CCU’s Hurricane Genesis & Outlook (HUGO) Project, a hurricane model system established in 2013.

Recognized at the event were Pietrafesa, a Burroughs & Chapin Scholar on the SCMSS faculty; Bao, a computational, deterministic numerical modeler specializing in meteorology and oceanography on the SCMSS faculty; CCU alumnus Bryan Keller, now a Ph.D. student at Florida State University; and Gayes, longtime CCU professor and director of SCMSS.

The commander of the South Carolina State Guard, Brig. Gen. Thomas Mullikin, who also serves as a research professor in the SCMSS, says that these scholars’ contributions “assisted in mitigating the negative impact on our state through their expert and timely counsel. Simply stated, they were brilliant, diligent patriots who volunteered to bring their significant resources to meet challenges associated with the 1,000-year flood.”