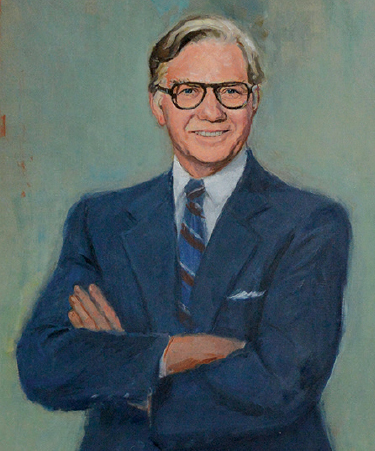 CCU recognized one of its   founding fathers when it unveiled a portrait of the late Joseph W. Holliday during a ceremony in Atheneum Hall Alumni Center. The portrait was donated to the University by the Holliday family.

Holliday, a native of Galivants Ferry, was a leader in the governance of Coastal Carolina in its formative years. As chairman of the Horry County Higher Education Commission, he presided at Coastal Carolina Junior College’s inaugural commencement ceremony on May 27, 1959. A few months after that historic occasion, Holliday and fellow members of the CEF’s executive committee met with representatives from the University of South Carolina at the Chat ’n’ Chew restaurant in Turbeville, the geographical halfway point between Conway and Columbia. During that meeting, the two sides forged a partnership that established Coastal Carolina Regional Campus of the University of South Carolina, which lasted until 1993.

“I remember how hard my father worked in those weeks leading up to the negotiations,” said Holliday’s son, J. William F. Holliday. “I am sure my father would be amazed at the growth and development of Coastal’s beautiful and ever-expanding campus.”

Holliday continued to serve on the CEF until he passed away in 1981. In 1987, he was posthumously awarded Coastal’s Founders Medallion.