CCU committee to evaluate safety of S.C. 544 near campus 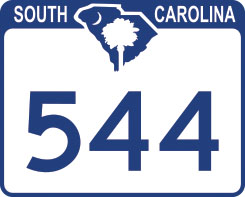 Coastal Carolina University President David A. DeCenzo has formed an ad-hoc committee to research opportunities for improving student and pedestrian safety in the S.C. 544 area of the campus community. The group includes representatives from CCU’s Department of Public Safety, University Counsel, Campus Life and Student Engagement, Student Rights and Responsibilities, and the Student Government Association.

“This committee is charged with critically important work, founded on the primary goal of providing a safe campus for students,” said DeCenzo, who began the process by meeting with Mike Wooten, chairman of the South Carolina Transportation Commission. Wooten committed to working with the University to determine options and develop additional safety measures.

“Hopefully, we will be able to identify some structural and nonstructural elements that will discourage students from taking unnecessary risks and, at the same time, alert drivers to the danger associated with pedestrian traffic on Highway 544 near the CCU campus,” said Wooten. The committee met with S.C. DOT engineers in February.

University administration began conversations four years ago with county and state officials to address concerns regarding student pedestrian traffic across S.C. 544 as more residential facilities (both private- and University-owned) on the highway have been constructed. A crosswalk and traffic light were installed at the Founders Drive entrance to campus on S.C. 544 in 2013, and shuttle service to and from the campus residence facilities on S.C. 544 has been modified to better suit student schedules.

These measures are part of an overall strategy to make the campus more pedestrian-friendly and safer for students, in accordance with the University’s Campus Master Plan. During the two years since CCU acquired University Boulevard, the University has constructed four crosswalks and lowered the speed limit from 40 mph to 30 mph on that roadway. Vehicular traffic has been restricted on a foot-traffic heavy section of Chanticleer Drive, improving safety for students accessing the academic center of campus from the on-campus residence halls. As parking areas continue to be relocated to the perimeter of campus, additional crosswalks, sidewalks and bike lanes have been added.