For the past 10 years, Shaowu Bao has spent most of his working life studying hurricanes, but he never experienced one up close until Hurricane Matthew visited the South Carolina coast last October.

When Bao and his fellow scientists on CCU’s Hurricane Genesis & Outlook (HUGO) team predicted back in June that the 2016 Atlantic hurricane season would produce one hurricane that would make landfall on the Gulf Coast and one on the U.S. East Coast, he had no idea that one of them would wind up in his own backyard.

But when he looked out of his kitchen window on Oct. 8 and watched the wind uproot a tree, the meaning and importance of his career were driven home to him as never before.

“I have always been aware that our work is useful and that it helps the community,” said Bao, “but in this case, the community was mine. It definitely makes it all more real.” 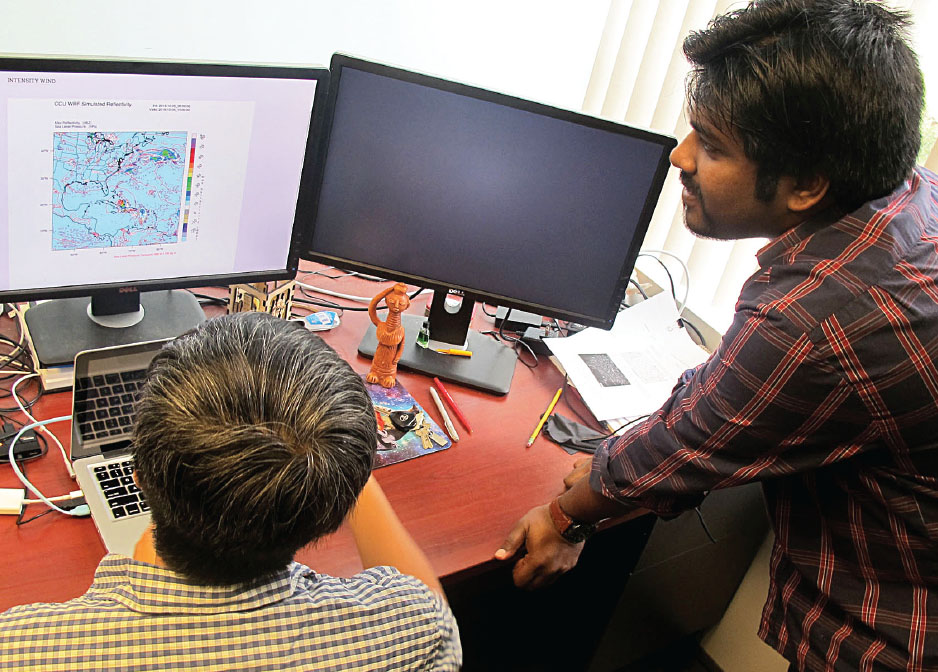 Shaowu Bao (back to camera) and Mansur Ali Jisan review their forecast track for Hurricane Matthew.

Bao, a computational, deterministic numerical modeler specializing in meteorology and oceanography, is a key member of the distinguished team of scholars assembled by veteran climatology scientist Len Petrafesa and Paul Gayes, longtime director of CCU’s Burroughs & Chapin Center for Marine and Wetland Studies. The other members are Tingzhuang Yan, a meteorological oceanographer with a background in statistical modeling of climate and weather systems; and Mansur Ali Jisan, a CCU student earning a master’s degree in coastal marine and wetland studies.

Even though they had to deal with some downed trees, damaged roofs and missing shingles from Matthew, they all felt a sense of triumph in having produced a forecast product that was right on the money—more accurate, in fact, than those of many other respected organizations and institutions.

The team’s updated outlook in June proved to be correct in nearly every major category, as the graph below indicates.

The numbers in parentheses represent the range of probability. The number of landfalls is given as a probability in order of decreasing likelihood in three stages.

“The HUGO forecast aced the 2016 season,” said Pietrafesa, senior research professor in CCU’s School of the Coastal Environment and a former chair of the National Oceanic & Atmospheric Administration (NOAA) Advisory Board. “CCU was the only forecast organization to correctly predict one landfall in the Gulf of Mexico and one landfall on the Eastern Atlantic seaboard, and the other HUGO forecast predictors were highly accurate.”

Paul Gayes, who has led the Burroughs & Chapin Center for Marine and Wetland Studies since 1989, says that this remarkable achievement by the HUGO team fits into a broad framework of research the center is conducting.

The HUGO team’s forecast for the 2015 Atlantic hurricane season was also highly accurate. The 2015 outlook correctly forecast a most likely scenario that no hurricanes would make landfall on either the East or Gulf coasts. It also accurately forecast the number of hurricanes at four for 2015.