After Chris Evans ’09 opened the Grumpy Monk, he worked an entire year, often from 8 in the morning until midnight, before he took a day off.

“I had seen how others had started successful businesses, and I wanted to see if I could do it for myself.”

“A lot of restaurants fail because people don’t understand the responsibilities involved,” says Evans, who earned a bachelor’s degree in resort tourism management from Coastal Carolina University. He says that during many of the long hours of hard work he has often thought of something that CCU economics professor Yoav Wachsman always told him: “You have to love what you do.”

Evans always loved the hospitality industry. One of his first memories is of raiding the maids’ carts at Disney World when he was a kid, fascinated by the inner workings of the resort business. “There’s something about it that’s always busy, happy, active.”

He grew up in the Buffalo area of New York, where he studied business management at a community college before enrolling at CCU. “I was considering transferring to Niagra University, but my brother was going to Winthrop and a friend of his ran track at CCU. When I visited the campus with them, I knew it was where I wanted to complete my degree. Plus the fact that Myrtle Beach has a higher percentage of job placements.” 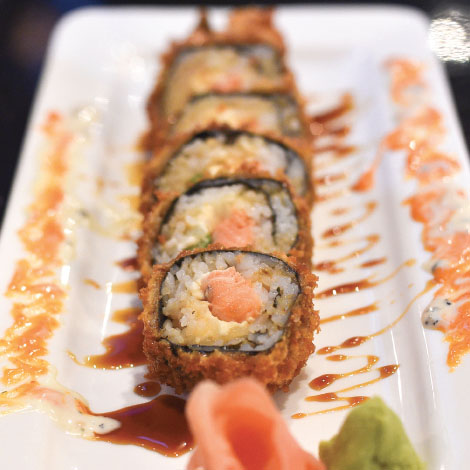 House Specialty: Sushi is one of the Grumpy Monk’s signature dishes.

During his first year at Coastal Carolina University as a junior transfer student, Evans found himself going to school full time and working five nights a week as night auditor at the Baymont Inn and Suites on Restaurant Row. But it was a casual encounter at a job fair on Prince Lawn that set the trajectory of his future career in motion.

“I was sitting in Taylor Damonte’s class,” Evans recalls. “He invited us all to go to the career fair, and I met with a representative of the Marriott Grand Dunes in Myrtle Beach.” Evans was offered a full-time job in the hotel’s food and beverage operation. During his senior year, he took 18 hours a semester to finish the coursework for his degree and worked 40 hours a week in an evening position at Marriott.

Two years after he graduated from CCU, Marriott promoted Evans to a new position at their hotel in Albany, N.Y. He found that he respected the company’s professional ethos of hard work and excellent service, and he recommends company founder Bill Marriott’s memoir, Without Reservations, to anyone considering a career in the hospitality business. After Albany, he climbed further up the Marriott ladder at its New Orleans hotel. Although it was a good position in a major, high-volume market and an exciting city, Evans eventually got the itch to start his own business.

I wanted to come up with a catchy name to go with ‘monk. Grumpy’ seemed the right choice, funny and memorable.”

“I had seen how others had started successful businesses, and I wanted to see if I could do it for myself,” he says. After considering his options, his experiences and his hunches, he decided that he wanted to go into the restaurant business, and he wanted to do it in Myrtle Beach.

In the course of putting together a business plan, the project evolved in several significant ways. Evans acquired two partners: Heri Heyadi, a sushi expert whose company provides sushi for about 50 restaurants in the region; and Greg Hicks, an area restaurateur with a proven record of success. They decided to focus on sushi and craft beer, a unique combination for this market. After several hurdles, the financing came through and they secured the building located near the entrance to Carolina Forest that had started as Desperados. The Grumpy Monk opened in March 2015. 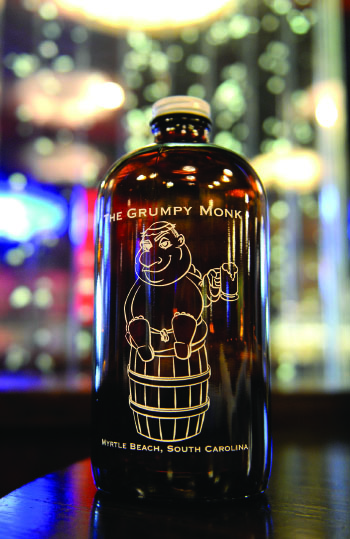 The name was Evans’ idea. “When I used to travel for Marriott, I made a point of noticing creative business names. The Trappist monks of Belguim are famous for their beer, and I had seen a ‘Thirsty Monk’ and a ‘Hungry Monk,’ so I wanted to come up with a catchy name to go with ‘monk.’ ‘Grumpy’ seemed the right choice, funny and memorable. When customers ask me about it, to save time I just tell them it was my college nickname.”

The tourist trade accounts for only 5 percent of his business, according to Evans. The restaurant has doubled its original sales goals, and Evans and Heyadi, who recently bought out Hicks’ interest in the business, recently opened another location in the Charlotte area.

Evans says the advice and instruction his CCU professors gave him are never far from his mind when it comes to running the business. “I try to instill in my employees what Dr. Wachsman told us. You have to love your job. It’s like a circle: when your employees enjoy what they’re doing, the guest is happy. And if the customer is happy, I’m happy!”