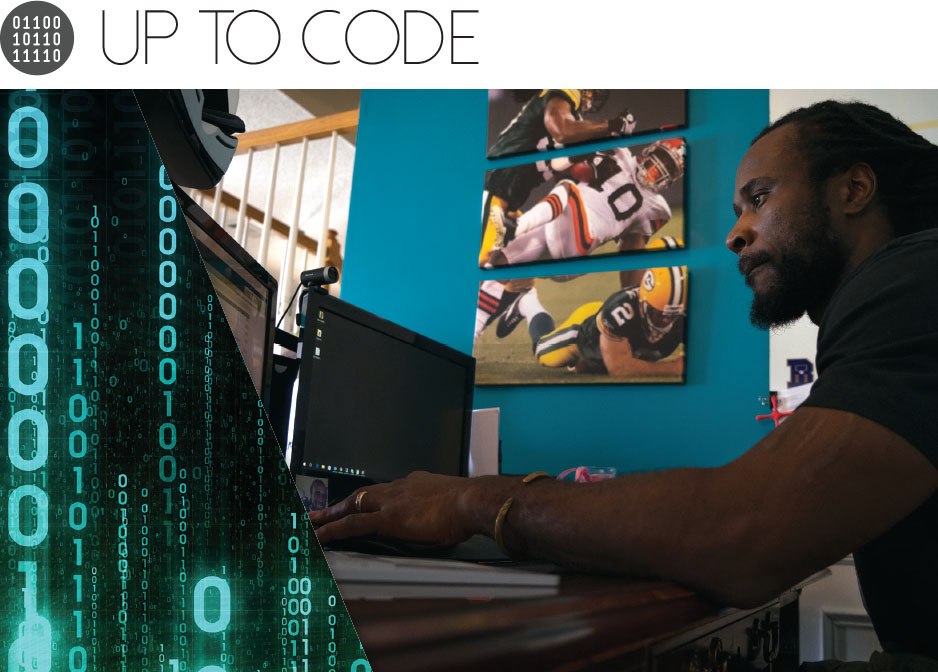 In the summer of his 12th year, Maurice Simpkins was helping his grandfather dig graves in the 100-degree heat near his hometown of Batesburg-Leesville, S.C. When Maurice asked why they were working so hard in the blistering heat, Andrew Simpkins advised his grandson that there were two lines of work that would always provide steady employment: funerals and education.

“I’m a student before I’m an athlete, and I’m a computer programmer at heart.”

Simpkins, who graduated in 2006 with a double major in computer science and business administration, has followed the path of education both in his business pursuits and in his approach to life.

Many remember him as Coastal Carolina University’s first football player. Simpkins transferred from Catawba College, accompanying coach David Bennett when he was tapped to build CCU’s premiere football program in 2002. The 6-foot, 225-pound linebacker was a key contributor to the Chanticleers’ 6-5 record that first year (2003) and to the team’s back-to-back Big South Championships in 2004 and 2005. He holds the CCU single-game record with three sacks versus Charleston Southern. 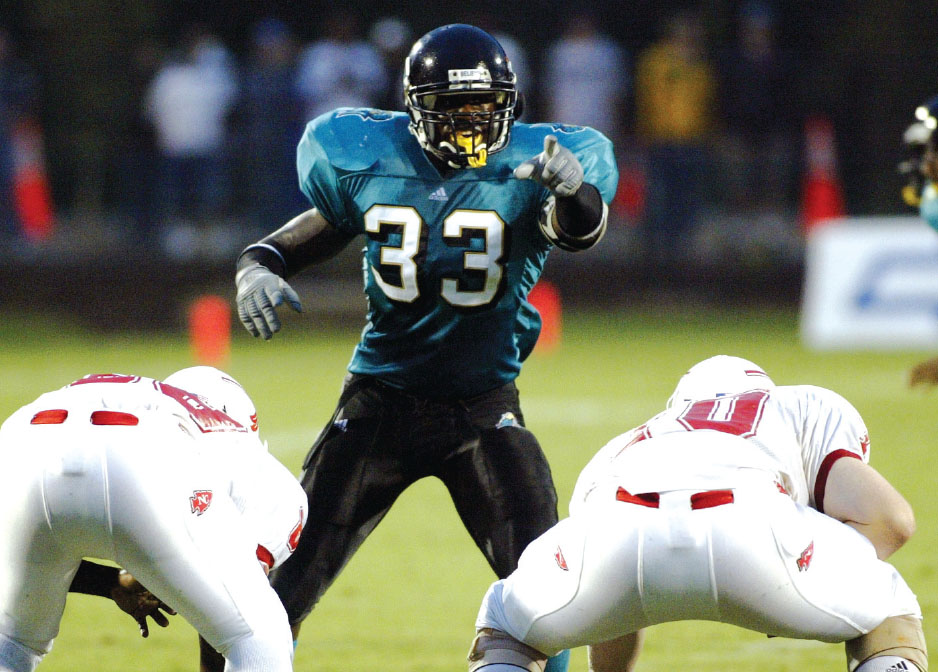 Game Plan: Maurice Simpkins (center) applies the goal-oriented mindset he developed on the playing field to his business pursuits.

Simpkins was also named to the conference’s All-Academic Team, reflecting his intense determination to succeed in the classroom as well as on the playing field. Having a natural aptitude for computers, especially coding, he majored in computer science and minored in business. In his senior year, seeing that he was only a few credits short of having a major in business, Gina Markland, then the academic adviser for Coastal Athletics, pointed out the advantages of getting a double major.

“I’m a student before I’m an athlete, and I’m a computer programmer at heart,” he says. “The Coastal faculty, especially [math professor] Prashant Sansgiry and [computer science chair] Jean-Louis Lassez, made me feel at home and encouraged me.”

After he graduated, Simpkins pursued football and computer code simultaneously with equal passion. He went on to play professionally, first with the indoor teams the Rock River Raptors and the Green Bay Blizzards. In 2010, he joined the Green Bay Packers as a free agent, was signed to the practice squad, but was released. He was with the St. Louis Rams for about eight months in 2011.

My character comes from my grandfather. He taught us... not to allow someone else to limit what we could achieve.”

In the meantime, Simpkins began programming software for a community college in Illinois in 2007 and later for Morehouse College School of Medicine. He found his groove in information technology (IT) for higher education, and soon discovered the world of consulting.

“After I was released from St. Louis, I made up my mind to focus my career solely on higher education software consulting,” says Simpkins. He was hired by Suffolk University in Boston, and he began building his own client base. In a few short years, he had more IT and consulting work than he could handle, and he often found himself banging out code 15 hours a day. His wife, Laqwacia Simpkins, advised him to start a company and hire programmers to help. The couple started AMSimpkins & Associates in 2015. The company, based in Lawrenceville, Ga., near Atlanta, now has more than 20 employees.

His own success has given Simpkins the impetus to reach out to the younger generation of kids who are from disadvantaged areas. Last year, he started two summer camps for children ages 5 to 7 years old—Spark IT, a summer camp focusing on computer technology and a summer football camp, both held in Batesburg-Leesville.

“A lot of kids growing up without the benefit of good role models see sports as the only way to make it out,” says Simpkins. “But I promise you, if I could have seen my IT career laid out before me when I was a kid, I would have never picked up a football.”

Partnering with a higher education consulting firm and involving members of the Omega Psi Phi Inc. fraternity, the Simpkinses organized their first IT camp during the summer of 2016 in conjunction with Lexington School District III. Plans are underway to expand the event this summer to other locations: Denver, Colo., and Myrtle Beach. The three-week IT camp focuses on coding during the first week, robotics for the second week, and winds up with a week of electronics.

The camp is administered through the Andrew Simpkins Innovation Foundation, a nonprofit association that Simpkins created in memory of his grandfather. “One of the purposes of the camps is to build character,” says Simpkins. “My character comes from my grandfather. He taught us to work hard and never to give up. We couldn’t go outside until our homework was done. If there was no homework, he had a set of  World Book encyclopedias under the TV, and we had to read those. By the time I finished high school, I had read the whole set. He taught us not to allow someone else to limit what we could achieve. I live by that.”