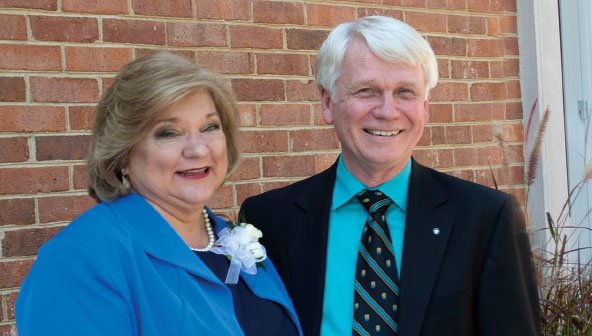 Coastal Carolina University’s alumni headquarters was officially named the Clark and Marcia Parker Atheneum Hall Alumni Center at a ceremony this past September. The addition of the Parkers’ names to the landmark building recognizes their longstanding service and commitment to CCU. The naming of the building was made possible through a major gift from an anonymous donor. The gift supports the University’s I’M IN endowment campaign, which has a goal of increasing CCU’s endowment by $20 million by 2020.

Clark and Marcia Wells Parker graduated from Coastal in 1977 and 1978, respectively. Clark earned a bachelor’s degree in accounting, and Marcia earned a bachelor’s degree in business. The couple met while working as official scorekeepers at the basketball games and married in 1976. After graduating, they continued their involvement with the University by maintaining the alumni records. They also spearheaded the formation of the alumni association, of which Clark served as president from 1979-1981, and they organized the first alumni class reunion and homecoming. As chairman of the Horry County Higher Education Commission in the early 1990s, Clark was instrumental in the institution’s move from the University of South Carolina system.

Parker served on the University’s first board of trustees for 15 years from 1993 to 2008, when he was named trustee emeritus. He led the athletic booster organization in the early 1980s. He now serves on CCU’s E. Craig Wall Sr. College of Business Administration board of visitors.

The building now designated as CCU’s Atheneum Hall opened its doors in 1966 and houses the Office for Philanthropy and the Office of Alumni Relations, as well as the Coastal Educational Foundation.