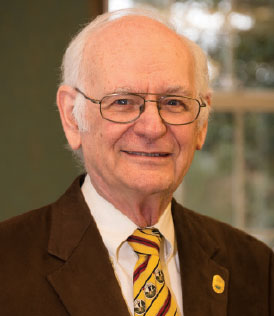 Carl Schwartzkopf, a former professor in the PGA Golf Management Program at Coastal Carolina University, is donating his house in the Coastal Heights neighborhood near campus through a planned gift to the University. As part of his gift agreement, proceeds from CCU’s eventual sale of the property will be used to establish the Carl H. Schartzkopf Program Fund, which will benefit the General James Hackler Golf Course at the University. The gift supports the University’s I’M IN endowment campaign.

The proceeds will support future renovations at the Hackler Course, a public, 18-hole golf facility located adjacent to the campus. Coastal’s PGA Golf Management Program is one of 18 programs in the U.S. accredited by the PGA of America and is housed in Coastal Carolina University’s E. Craig Wall Sr. College of Business Administration.

“The Hackler Course holds a very special place in my heart,” Schwartzkopf said. “It is satisfying to know that my support will help contribute to the well-being of the course in the future.”

Schwartzkopf began his career in golf course management at Oakland Hills Country Club in Bloomfield Hills, Mich. At the time, he was one of the first course managers with a college degree in turf management. In 1972, he was hired by the U.S. Golf Association (USGA) and spent the next 10 years advising courses on best practices. He later was named national director  of the USGA.

In 1989, Schwartzkopf moved to South Carolina, where he taught golf course management courses at both Coastal Carolina University and Horry-Georgetown Technical College for the next 14 years. He served on the Horry County Council for more than 10 years.