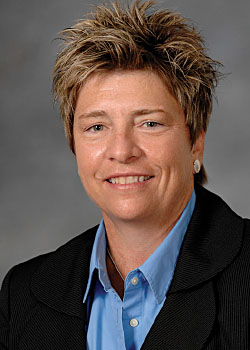 Paige Cribb, PGA, director of student support for the PGA Golf Management Program at Coastal Carolina University, has been elected as the first woman president of the Carolinas PGA (CPGA) Section.

“This is historically significant, not only for the Carolinas PGA, but for the entire PGA of America,” according to the CPGA. “It is part of the PGA of America’s foundational plan that we will be defined by our commitment to diversity and inclusion that resonates throughout the PGA of America, its programs and practices. With Cribb in this position, this helps further our commitment and support of this important initiative for the game of golf.”

“I just happen to be a woman and a PGA member who enjoys the game and business of golf,” says Cribb. “I am grateful and honored to represent the CPGA, the largest of the 41 sections. Being the first female is awesome, but was definitely not a factor or a thought when I decided to run back in 2011 as area VII director. At CCU, my passion is to help our students reach their career goals, and that same passion drives me to help our 2,300 CPGA members and associates reach their career goals.”

Cribb will serve as president of the Carolinas PGA Section until 2020. She was named CPGA area VII director in 2011. She was elected to serve a two-year term as secretary of the CPGA in 2014, and as vice president in 2016.