The Department of Computing Sciences 2019 Outstanding Students were recognized at the 2019 Honors Convocation.  The Honors Convocation is a singular occasion for the faculty's recognition of outstanding academic achievement by our students and colleagues. To emphasize the academic significance of this occasion, recognitions are limited to the academic awards, HTC Honors College graduates, acknowledgement of Dyer Fellows, Jackson Scholars, Swain Scholars, Teaching Fellows and Wall Fellows, the Distinguished Student Award, the Distinguished Professor of the Year Award and the Undergraduate Research Competition Awards.

Hope Epton is originally from New York and is a veteran of the United States military, having served in the Army. She relocated to the Myrtle Beach area in 2004, with her son Joshua, who was 9 at the time. She had always had the goal of attaining a bachelor’s degree and in keeping with that, first attended Coastal Carolina University in the summer of 2008. During her bachelor’s program, she married her best friend Stephen in 2009, and had their daughter Gabriella in late 2010. Throughout the program, she maintained academic excellence while continuing to work full time as an Application Developer. She graduated Magna Cum Laude in 2012, with a bachelor of science in Exercise and Sport Science, minoring Health Promotion. In 2016, she returned to pursue her master’s degree in Information Systems Technology in an effort to expand her knowledge in data analytics. Upon graduation she plans to continue to work in the technology field, moving toward a more data analytics centered role.  Learn more about Hope Epton >>

Bachelor of Science in Computer Science

Megan Hickman Fulp arrived at Coastal Carolina in 2015 from Summerville, South Carolina. While achieving her Bachelor of Science, with Applied Mathematics minor, she was named to the President’s List and the Dean's list. She was accepted into the Computer Science Honor Society (Upsilon Pi Epsilon) and the Honors Fellowship. She helped start various new clubs and programs, including the CCU ACM Student Chapter, the CCU Women in STEM Fellowship and the Honors Fellowship. She had various on-campus jobs, as a tutor, teaching assistant, and research assistant with affiliation to Los Alamos National Laboratory. After graduation, she plans to further her research over the summer at LANL and pursue graduate studies in Computer Engineering at Clemson University.  Learn more about Megan Hickman Felp >>

Bachelor of Science in Information Systems 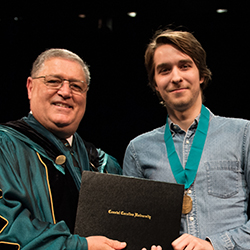 Kenneth "Brandon" Lilly, a Conway, SC native, graduated from Coastal Carolina University with a Bachelor of Science in information systems. He has achieved Dean’s List status every semester since his arrival at Coastal Carolina University, and has been an asset the Department of Computing Sciences, serving as a Tutor and lab assistant for the past two years. Lilly has been a recipient of the Nancy and Cathcart Smith Scholarship as well as the South Carolina LIFE Scholarship. His primary areas of interest within the field are computational modelling and software engineering, and he plans to pursue a career as a software developer post-graduation.  Learn more about Brandon Lilly >>

Bachelor of Science in Information Technology

Daniel Miranda, from Lowell, Massachusetts, enlisted in the United States Air Force directly after high school and served honorably for six years as an aircraft maintainer. Following his service, Miranda moved to Conway, South Carolina in 2016 to peruse his Information Technology degree, with a Business Administration minor. As a student at Coastal Carolina University, Miranda has distinguished himself, earning his spot on the Dean’s List every semester. Additionally, as a volunteer with the American Red Cross, Miranda developed a marketing project that enabled the University to exceed their monthly quota of donations. In the near future, Miranda plans to seek a career as a Server Administrator.  Learn more about Daniel Miranda >>