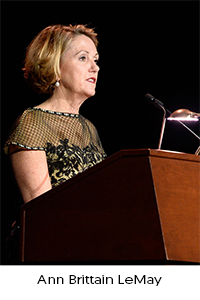 The Brittain family of Myrtle Beach has established the Brittain Family Scholars Program. The endowed program, created to benefit high-achieving Horry County high school graduates, will offer one of the most academically and financially competitive scholarships available at CCU.

“The Brittain family has always been very pro-education,” said Brittain LeMay, “believing that it is very important for people of all walks of life to have a good education. We have been blessed with our businesses, and we always look for opportunities to give back what we have been given. Supporting Coastal Carolina University through the Brittain Scholars Program is a perfect fit.”

According to Brittain LeMay, the Brittain family recognizes Coastal’s longstanding record of careful fiscal management and its emphasis on student success. “Coastal is concerned about the community and its place in the community. CCU provides a great education for its students. The Grand Strand area is fortunate to have a first-class university. There are lots of things to support locally, and we feel Coastal Carolina University is a great choice.”

A longtime supporter of CCU, Brittain was named an honorary founder of the University in 1995. He was a member of the Coastal Educational Foundation from 1976 to 2016. Brittain was instrumental in the establishment of the University’s PGA golf management program. In 2001, the Clay Brittain Jr. Center for Resort Tourism was established in CCU’s E. Craig Wall Sr. College of Business Administration. A campus academic and office building was named in his honor in 2013. He died in February 2016.