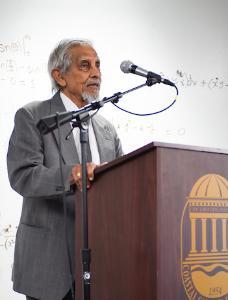 Subhash C. Saxena, Ph.D., a retired CCU mathematics faculty member, has made a financial contribution to the College of Science. In recognition of his gift, the mathematics faculty office suite and teaching space on the second floor of the newly renovated R. Cathcart Smith Science Center has been named the Dr. Subhash Saxena Math Suite. The endowed fund will support faculty members and undergraduate students who conduct mathematics research.

Saxena, distinguished professor emeritus, began teaching at Coastal in 1973. He was a mainstay of the Department of Mathematics and Statistics for nearly 30 years before retiring in 2000. In 1985, he earned the University’s Distinguished Teaching Award and was then named Outstanding Teacher within the University of South Carolina system. Saxena served as department chair from 1987 to 1993. He is also credited with establishing a Pi Mu Epsilon national mathematics honor society chapter on campus.

“Coastal Carolina University is the crown jewel of Conway, Horry County, Georgetown County and all of South Carolina,” Saxena said. “I am really happy to see what this place has become. It is not only the buildings; it’s what our young students are learning within the buildings. They are at the right place at the right time.”

Saxena left his native India in late 1959 after earning a bachelor’s, master’s and Ph.D., all in mathematics, from the University of Delhi.