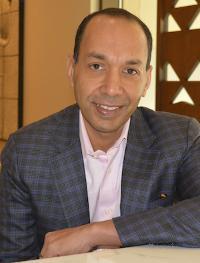 The naming of CCU’s Gupta College of Science is to recognize the generosity of Sunny Gupta ’92, a leading software entrepreneur. His recent gift, one of the largest ever received by the University, will provide financial resources and student scholarship support for the college, which boasts more than 4,300 students and has the largest enrollment of CCU’s six academic colleges.

Gupta, a native of Chandigarh, India, earned a bachelor’s degree in computer science and a minor in mathematics in three years from Coastal. As a student, he served as an intern in the Chancellor’s Office, as a resident adviser and as president of the International Club. He also worked in the computer science lab.

“Coastal Carolina gave me the opportunity to learn computer science and go on to start three companies and eventually start Apptio,” Gupta said. “I also received an academic scholarship – without this scholarship, I would have never been able to complete my education. Without the education, faculty and the support from Coastal, I would have never gotten to where I am in my life today. I am so grateful, and I wanted to create an opportunity for future students who don’t have the financial means to pay for their education. Hopefully, they will get the opportunity to earn an education and become successful in their personal and professional lives.”

Gupta is the co-founder and CEO of Apptio, one of the nation’s fastest-growing software as a service (SaaS) companies. It builds advanced data and analytics applications that help technology leaders analyze and plan their technology spending so they can invest in products that increase the speed of business and deliver innovation. Founded in 2007, Apptio is headquartered in Bellevue, Wash., with an additional 15 offices around the world.

Prior to founding Apptio, Gupta was executive vice president of products at Opsware, responsible for all product businesses, until Opsware’s acquisition by HP in 2007. He was also the co-founder and CEO of iConclude, which pioneered the IT runbook automation market through its acquisition by Opsware. He previously held senior leadership roles in products, business development and engineering at Mercury Interactive, Rational Software, and IBM.

He and his wife, Prerna, have two children, Zubin and Zoe, and live in Kirkland, Wash. Gupta was named the College of Science’s 2008 Outstanding Alumnus of the Year. The couple previously established the Sunny and Prerna Gupta Jamboree Alumni Scholarship at CCU.