Feel the Teal - Coastal Carolina University
In This Section

Service excellence is the primary focus of the Feel the Teal initiative launched by Coastal Carolina University President David A. DeCenzo in August 2012. Feel the Teal plays a vital role in CCU's campus retention efforts by cultivating pride, encouraging growth, and providing continuous training and service resources for the University community.‌

What is Feel the Teal?

Meet the Feel the Teal Team 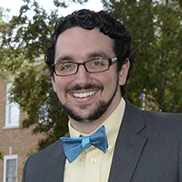 Nick DeStefano joined Carolina University in June 2011 as resident director in University Housing. His next role on campus was in the Office of Student Life as the coordinator for leadership education. While with Student Life, DeStefano became one of the first employees to get involved with Feel the Teal and attend training in 2012. He recognized the essential role of Feel the Teal in improving CCU's campus culture and climate and began to volunteer as a Feel the Teal facilitator for two of the training modules. DeStefano officially joined the team in Training, Development and Service Excellence in February 2016. His role focuses on providing an engaging and educational customer service training program for student workers. He is also responsible for facilitating many of the training modules for faculty and staff.

DeStefano earned a Master of Science in organizational management from Misericordia University in Dallas, Penn.