A Celebration of Gullah Geechee Scholarship 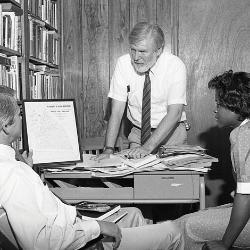 The legacy of Gullah Geechee outreach and research within the Edwards College began long before the college was officially established, and its impact is perpetually expanding. The creation of the Charles Joyner Institute for Gullah and African Diaspora Studies in 2016 was a formal acknowledgement of work that had been proceeding for decades and a commitment to its eminence within the college.

Joyner (1935-2016) was an internationally acclaimed historian whose groundbreaking work Down by the Riverside: A South Carolina Slave Community (1984) established the standard for Gullah scholarship by adopting the perspective of Gullah people themselves. As Distinguished Professor Emeritus of Southern History and Culture who taught at CCU for more than three decades, Joyner’s thread of scholarship has been shared and continued by colleagues including Veronica Gerald, director emeritus, and Eric Crawford, director, both of the Joyner Institute; Alli Crandell, director of the Athenaeum Press; and many others.

"You’ll find more the same in us despite the many wars that have been fought over the differences.”

CCU’s location at the northern tip of the Gullah Geechee Cultural Heritage Corridor perfectly situates it as a national center for academic research, and the Joyner Institute exists as the only interdisciplinary institute dedicated to a critical understanding of Gullah Geechee people and other descendants within the global African Diaspora. 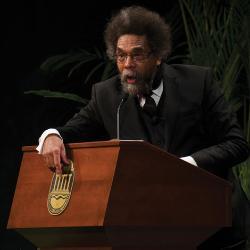 The Joyner Institute also facilitates collaboration among students and faculty within other Edwards College experiential centers. The Athenaeum Press has been central to Gullah Geechee scholarship, with numerous multi-media projects focusing on this culture’s music, language, food, history, and art: “At Low Tide: Voices of Sandy Island,” “A Little Chicken and Rice,” and “A Hushed Thrill” all allowed for direct interaction between Edwards College students and faculty and Gullah people, places, and culture. These projects, in fact, led to two significant grants for continued research, preservation, and archiving of Gullah Geechee cultural resources. 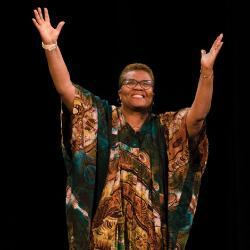 awarded by the National Archives in 2019 to make Gullah historical records accessible to the public and available to the community members who produced them.

Other branches of the Joyner Institute’s work includes the development of a minor in African and African Diaspora Studies and numerous study abroad trips that will allow students to travel to global locations from which the Gullah culture evolved. The addition of Ashlyn Pope, who is of Gullah descent, as associate director of the institute in Fall 2021 will bring a fresh perspective to its leadership.

As an author, musician, folklorist, anthropologist, and Southerner, Joyner gave a clear expression of the impetus behind his life’s work studying Gullah culture:

“You’ll find more the same in us despite the many wars that have been fought over the differences.”