Meet the Team - Coastal Carolina University
In This Section

ITS for Faculty and Staff 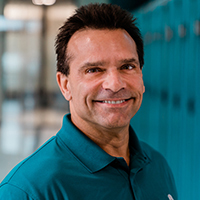 Born in New York, Chuck Bunnell grew up in Europe and Asia as well as United States due to his dad's Air Force career. Bunnell also spent eight years in the U.S. Air Force and was stationed at Myrtle Beach AFB for five of those years. Prior to working for CCU, he owned a web development company for 19 years.

Bunnell was hired as a web applications developer/programmer at Coastal Carolina University in 2015, and was promoted to applications and web development manager in 2017.

In his spare time he practices martial arts, lifts weights, and hangs out wherever there is live music.

Heather Kincer earned her Master of Science in computer technology from Southern New Hampshire University in 2014. She joined ITS in 2015 and is a web applications developer/programmer. She has been enrolled in CCU's Track III of the CCU Leadership Institute for Managers, Supervisors, and Emerging Leaders. Her five strengths from Tom Rath’s “Strengthsfinder” are adaptability, learner, restorative, empathy, and input.

Kincer moved to Myrtle Beach from Ohio in early 1989 with her parents. In her free time she enjoys spending time with her 8-year-old daugher, listening to live music, reading, or going to the gym. She has a love for the arts, bears (real or stuffed), and ice cream, especially chocolate with peanut butter.

Pierre Valdema is originally from Haiti, but has lived in South Carolina since 2005. He earned a Bachelor of Science in computer science in 2011 and an MBA in 2015, both from Coastal Carolina University. He is currently pursuing a master's degree in information system technology. He was hired at CCU as applications and web programmer/developer in 2017.

On Jan. 12, 2010, his journey to become a programmer was nearly halted. His home country, Haiti, suffered an earthquake that killed over 200,000 people. The financial support for his college degree from his parents, who lived in Haiti, stopped abruptly. Fortunately, CCU awarded him a full scholarship to complete his undergraduate education and pursue his dream. He would not be here today if it were not for this generous support of his education. Today, he is fortunate to apply the knowledge acquired while in college to develop highly functional web-based applications that are useful to students, faculty and staff.

During his free time, he spends time with his wife and son. His favorite Haitian food is black mushrooms with rice and spicy chicken sauce. He is a big fan of soccer and F.C. Barcelona is his favorite team. He also photographs weddings on the weekends. 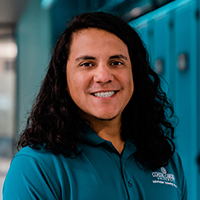 Originally from Peru, Elvis Petrovich is an avid consumer of caffeine and a big fan of futbol. He enjoys playing intramural sports and lifting weights.

Sometimes referred to as “Fabio” for his long locks, he earned a Bachelor of Science in information systems from CCU in 2015. He then embarked on a journey taking on a software testing role at Camstar Incorporated. Years later he decided to pursue a career as a web developer and worked as a front end developer for the HangBee startup.

In 2019, he began his career at CCU as applications and web programmer/developer. In the next few years, he hopes to pursue a master's degree in information systems technology.

Other ITS Staff who assist Web Services