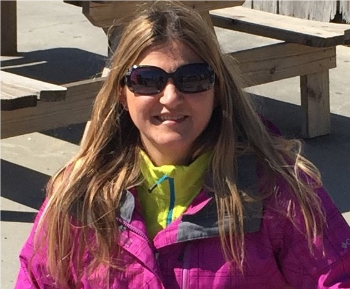 Associate professor Erin Hackett first began her career in the sciences follow­ing her graduation from Roanoke Col­lege in 2000, where she earned a B.S. in physics. Always interested in fluid dynamics, Hackett was intrigued by marine envi­ronments but had no desire to work as a biologist. It wasn’t until several years later, working through her first job as a systems engineer at the Johns Hop­kins University Applied Physics Lab, that Hackett discovered the field of physical oceanography.

Hackett learned that she could combine her physics background and her interest in ma­rine systems, so in 2004, she began the doctoral program at Johns Hopkins’ Department of Earth and Planetary Sciences. During the course of her graduate work, she took extra credits to earn a Master in Civil Engineering before completing her doctorate in physical oceanography in 2010. Her dissertation, “Flow and Turbulence in the Bottom Boundary Layer of the Coastal Ocean,” was just the beginning of her career studying the interac­tion between waves, currents, and turbulence in coastal systems.

Hackett knew she ultimately wanted to go into academia; however, she also knew she wanted to stay in the southeast region of the United States at a school with an even balance between research ­and teaching. While waiting for an ideal position, Hackett worked as a scientist at the Naval Surface Warfare Center, Carderock Division in Maryland, where she also established valuable connections for her future research and students. In 2012, the position Hackett was searching for came open at CCU in the Department of Chemistry and Ap­plied Physics, and the following year Hackett moved over to the brand new Ph.D. program in the Department of Coastal and Marine Systems Science.

During this time, Hackett began to form the Environmental Fluids Laboratory (EFL), co-directed by associate professor Roi Gurka. Hackett described this process as an “evolution,” saying “labs like these take time to build up and establish.” The lab, located in the CSC, is a large room full of equipment, advisers, and graduate students alike. Murals cover the walls that sur­round an elongated tank where students can run fluid dynamics experiments; in the corner, a state-of-the-art 3D printer makes models of things like shark fins; and large conference tables and com­puters invite collaboration and discussion among the lab.

Hackett describes the main goal of the lab as a space to study “fluid flows and how they affect different engineered and natural systems.” Stu­dents in the EFL use a combination of lab, field, and computational studies but are also expected to learn things like proper formal and informal communication techniques, good workplace be­havior and ethics, and how to publish and present their research.

Hackett has already graduated five students from the MS program and currently advises five more between the Ph.D. and M.S. degree options. Current projects that Hackett directly advises involve shark hydrodynamics, physics of the marine atmospheric boundary layer, and remote sensing of ocean surface waves and atmospheric conditions using radar. Her favorite part about advising is taking novice students and helping develop them into capable scientists. “The degree is not what is going to distinguish you as a scientist, but rather your capability upon graduation,” she said. Hackett went on to admit that she has a reputation for being “tough.” “I’m not going to approve a student’s graduate thesis unless they are operating at a professional employable level.” All of her students typically have at least one publication based on their thesis research.

One of the ways Hackett sets her students up for success is by building a bridge between the EFL and different naval labs where her students have the opportunity to go collaborate and get valuable work experience over the summer. Hackett noted that these naval labs require scientists with excellent communication and analytical skills but who are also US citizens, for security reasons. Students who enter into these collaborations get first-hand experience in data collection and analysis efforts at government labs; they can then take these experiences and apply them directly to their own research and development. In fact, several of Hackett’s students have gone on to secure excellent jobs in these naval labs upon graduation.

The degree is not what is going to distinguish you as a scientist, but rather your capability upon graduation.

Hackett also manages to find time to mentor aspiring women scientists at other institutions around the globe through her work with MPOW¬IR (Mentoring Physical Oceanography Women to Increase Retention), “an organization funded/supported by science agencies including: NSF, ONR, DOE, NOAA, and NASA.” Additionally, she has served as a mentor for external undergraduates through CCU’s NSF REU program (Research

Experiences for Undergraduates) with principal investigator professor Var Limpasuvan for the last three years, where she advises students doing computing and geoscience work in the coastal region.

When considering new students, Hackett pays close attention to the “work ethic, initiative, and curiosity” of each applicant. “These are skills that are difficult to teach, so it’s important for a student’s future success to possess these qualities,” she said. A few undergraduates are already getting their feet wet in the EFL, and one AIMS (Accelerated Integrated Marine Science) student is slated to begin full-time in the summer of 2020. “The real advantage of the AIMS program is to start the research early,” said Hackett, who notes that it can sometimes be hard for a student who doesn’t already have a project to complete their degree on time.

As the EFL continues to evolve, Hackett looks forward to pushing the boundary of fluid dynamics research while also sending qualified new scientists out into the field. Now that the infrastructure of the EFL is established, Hackett also hopes to recruit committed students who are both interested in the research taking place in the EFL and who also aren’t afraid to work hard and put in the hours in exchange for the wonderful experiences being offered within the lab.

If you’re interested in visiting the lab or learning more about Hackett’s research and the exciting projects taking place within the EFL, email ehackett@coastal.edu.