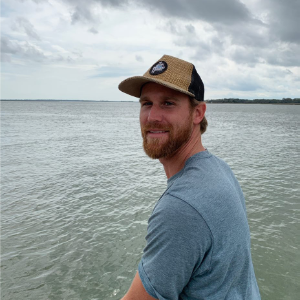 Thomas Bierce ’12 first came to South Carolina in 2005 through a Semester at Sea program in high school, eventually landing at CCU to major in marine science. While at Coastal, Bierce conducted undergraduate research and went on several school-led expeditions, such as Professor Erin Burge’s coastal ecology trip to Jamaica.

After graduating in 2012 with a B.S. in marine science and coastal geology and a minor in Spanish, Bierce spent some time traveling. Eventually, Bierce moved to Folly Island, S.C., where he began working in marine construction, salvaging and repairing boats, fixing and building docks, and doing commercial diving. Today, Bierce, along with his brother Peter and sister-in-law Caitlin, run Charleston Oyster Farm—the only working oyster farm in the area.

In 2016, Bierce began Charleston Oyster Farm, later joined by Peter and Caitlin. Starting with one cage of local seed, they are now permitted for 96 bottom cages. The cages hold seed, or “baby” oysters, that grow by filtering in the flowing water through the cages. The unique taste of the oysters is influenced by the conditions of the filtered water and sediment, due to their location near Stono inlet.

In addition to farming tasty seafood, the oyster farm improves the water quality. Bierce explained that farm oysters clean the water, take pressure off wild oysters, sequester carbon and nitrogen, and create shell and substrate. Because the seed oysters are reared in a hatchery, nothing is taken from the wild. The oysters are the reef, and their shells create the habitat. Bierce is also an outspoken advocate for shell recycling.

Today, Bierce partners with the College of Charleston where Caitlyn is a professor of geology. She developed an applied aquaculture course for graduate students to learn about different growing methods and factors to consider when growing shellfish. Students get experience using the lab at Charleston Oyster Company’s maricultural site. The Charleston Oyster Company is also working on permits to expand the operation into floating cages.

As the oyster farm grows, the Charleston Oyster Company continues its commitment to the environment and fostering the ecological benefits of more oysters in the area.