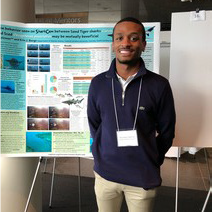 From the moment Nicholas Coleman came to tour Coastal Carolina, he knew this is where he wanted to further his academic career. “I grew up in the Chesapeake Bay, so I have always been interested in marine and estuarian science,” he said. “The Academic Common Market offers in-state tuition for marine science, and Coastal has a very strong program.”

Coleman, a junior major in marine science and minor in biology, is an active stu­dent within CCU’s College of Science. For example, he serves as treasurer of the American Fisheries Society—a club started in the fall of 2018 by assistant professor Derek Crane. Coleman is also a Research Fellow within the College of Science, becoming involved in research the beginning of his sophomore year. He began as a 399 student under profes­sor Erin Burge, working on the “Fish Community Monitoring Project” using SharkCam located on Frying Pan Tower off the coast of Wilmington, N.C. (If you recall from the previous issue of “The Coastal Current,” SharkCam is a high-powered HD camera used to survey fish assemblage and the surrounding hard bottom community.)

You really get that hands-on connection with your mentor.

Coleman presented his findings for the project at the Southeastern Estuarian Re­search Society Conference in March 2019, where he won best undergraduate poster pre­sentation. As a College of Science Research Fellow, he can conduct graduate-level research at the undergraduate level. This has been instrumental in furthering his understanding of the scientific process. His favorite thing about Coastal is the professors who are willing to go above and beyond for their students. “You really get that hands-on connection with your mentor,” he said.

This summer, he is participating in the Chesapeake Research Consortium Fellowship called C-Stream. He will be working within the Chesapeake Bay area at the Virginia Institute of Marine Sciences (VIMS). Working with Mary Fabrizio, a fisheries scientist at VIMS, he will examine local summer flounder and black sea bass.

After graduation, Coleman plans on attending graduate school and continuing to learn about other ecosystems. He is look­ing forward to meeting and working with other scientists in the Chesapeake Bay area.