About the Swain Scholars

The Jewel Clemmons Swain Scholar is Caroline Durham, a public health major in the honors program from Myrtle Beach, S.C. She has a passion for international public health issues and has traveled to East Africa as part of a study abroad program and has volunteered with an international volunteer foundation for children with cancer in Colombia, South America. Durham plans to join the Peace Corps for two years after graduating and then pursue a master’s degree in public health and work in preventative health care in underdeveloped countries.

“I am so grateful to have the opportunity to bring awareness and change to the community I was born and raised in,” said Durham. “I hope to better the lives of residents in Horry County through research with other students that share common interests with me.”

Jonah Nordeen is a CCU University Housing resident adviser, a chemistry laboratory assistant, and a chemistry tutor. He is also currently participating in research involving the synthesis and modification of compounds that mitigate the effects of oxidative brain damage. Nordeen has particular interest in understanding the biological mechanisms of neurodegenerative disorders such as Parkinson’s disease and Alzheimer’s disease. He plans to attend medical school and be involved in research for these disorders.

“To be named a Swain Scholar is an incredible honor, and I’m extremely excited to be a part of a program that simultaneously provides me with priceless experience and provides assistance to those in need in the surrounding communities,” said Nordeen.

Armani Sumpter recently completed an internship at Smith Medical Clinic in Georgetown, S.C, where she shadowed physicians and educated patients on the importance of disease prevention. She is involved in numerous initiatives on campus and volunteers for multiple organizations, including the American Red Cross and the Pee Dee Community Teen Improvement Project.

Being a Swain Scholar means an opportunity to contribute to the local community through educating and creating awareness about health concerns specific to this area.”
Armani Sumpter, public health major from Hemingway, S.C. 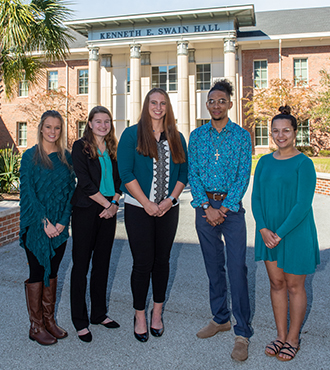 Rachael Trudon, a sociology major with a focus in criminology from Coventry, Conn., is a member of the Theta Beta Chapter of Phi Sigma Sigma and is the committee chair of the Panhellenic Delegate. She has been inducted into the Phi Eta Sigma, a national honor society for first-year college students, and is a member of the National Honor Society of Leadership and Success.

Hailey Wimmenauer is an exercise and sports science major and coaching minor from Harleysville, Pa. She is the daughter of Deanna and John Wimmenauer.. Wimmenauer is co-captain of CCU’s club Quidditch team and the student manager for CCU’s women’s soccer. She is also an honors fellow in Coastal’s Honors College. Following graduation, she hopes to be a soccer coach or sports trainer to help athletes develop their talents and reach their full potentials. She has been a volunteer assistant coach for youth soccer programs.

Kassidy Smith, a biology major with a minor in psychology from Collinsville, Ill., is a member of the CCU softball team, serves as an ambassador for the Sun Belt Conference and is vice president of CCU’s Student Athlete Advisory Committee. She has worked with Habitat for Humanity and Miracle League, as well as volunteered at her hometown food pantry and library. Smith plans to attend medical school and become a pediatric neurologist. She hopes to work in one of the nation’s top children’s hospitals.

“As an aspiring medical student, being part of this program will help me gain experience for medical school and my future career,” said Smith. “I am extremely excited to work with such an amazing group of people who share a love for bettering the health of others in our community.

I am super ecstatic to begin to promote change in my surrounding environment through this amazing health promotion program.”
Jeremy Evans

“I was just given the best opportunity I could have ever asked for.”
Amber Rayman

Jeremy Evans, a public health major with a minor in business administration from Lake City, S.C., is the president of a nonprofit community drama club, Dramatic Coffee Beans, and is involved in the National Beta Club, HOSA Future Health Professionals, Junior Leadership of Florence County and M.E.G.A. (Mentoring, Educating, Graduating and Archiving) Men. During this past summer, Evans interned with McLeod Health in the oncology unit and gained valuable experience in his field of study. He plans to earn a master’s degree in medical professions before attending medical school to study oncology. Evans aspires to eventually open his own practice.

Amber Rahman, an exercise and sport science major from Newark, Del., volunteers for the Dalton and Linda Floyd Family Mentoring Program and is as a role model for children (K-8) in local area schools. She enjoys singing, playing the guitar, and has performed and recorded in Los Angeles and Nashville. Following college, she plans to be a pediatric occupational therapist.

In recent years, the Swain Scholars have created projects focused around meeting health needs in the community, such as improving mental health for college-age students in Horry County, and combating misperceptions of homelessness in the region and researching food insecurity and its impact on Horry County.