The need among people experiencing homeless for hygiene items also emerged from our interviews. To address this need we created at Giving Wall at the Shepherd’s Table Community Kitchen where individuals can take what they need without the humiliation of asking for basic items (such as soap, toothbrushes/toothpaste, sanitary pads and tampons or condoms). 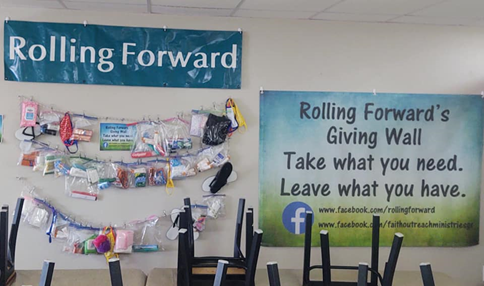 Coastal Carolina University recognized Sara Brallier and Stephanie Southworth's contributions to the homeless community during the 2022 Faculty Innovation and Excellence Awards, where they were presented with the Public Engagement, Outreach, and Service Award.

Rolling Forward Program in the News

Stephanie Southworth is an Assistant Professor in the Department of Sociology at Coastal Carolina University (CCU). Her research focuses on ways to reduce social inequalities. Stephanie is very involved in the community and serves on the Board of Directors at Faith Outreach Ministries and Shepherd's Table.

Sara Brallier is a Professor of Sociology at CCU, where she has been a faculty member since 2000. Her specializations are social gerontology, social inequality and research methodology. Sara is also an active member of the University and local community. She serves on the executive board of CAP Food Pantry and serves on the Board of Directors at Faith Outreach Ministries and Shepherd's Table.

Sara Brallier and Stephanie Southworth at a resource fair for the homeless community.