In media releases, public service announcements and other public statements, Coastal Carolina University’s Office of University Marketing and Communication observes the editorial style rules of The Associated Press (AP) Stylebook as closely as possible. AP style is used as a basic guide for the editorial content of all materials produced by the University for external audiences, although exceptions are made depending on the nature and requirements of the piece. There are some style guidelines and rules listed here that are unique to CCU and may be different than what is listed in the AP Stylebook. Those unique rules are decided upon by University Marketing and Communication.

The following list is intended to provide guidance in the preparation of written materials prior to sending the materials to MarComm for proofing.

acronyms — Organization names should be spelled out on first reference followed by the acronym in parentheses.

Example: Women in Philanthropy and Leadership (WIPL). Subsequent references should be restricted to the acronym only.

academic and administrative titles — Capitalize and spell out formal titles when they precede a name; however, put titles after a name in most cases. Lowercase elsewhere.

Note: Only individuals with an M.D. are referred to as Dr. and then only on first reference. People with Ph.D.s or Ed.D.s are not referred to as Dr. If mention of degrees is necessary, place the degree after the name, set off by a comma: Pamela Martin, Ph.D.

academic degrees — The preferred style is bachelor’s degree; master’s degree. When the formal degree (e.g., Bachelor of Arts degree, Master of Science degree) is used, it should be capitalized as indicated with no possessive apostrophe. When abbreviating formal degree names, use periods after the letters (B.A., B.S., Ph.D., Ed.S., M.F.A., B.F.A.) with the exception of the MBA (no periods). Also, associate degree is not possessive.

Majors, minors and subjects are lowercase except for languages. Examples: This semester, she is taking history, calculus, English and Spanish.

Atheneum — Coastal Carolina University’s symbol, a reference to the Temple of Athena (goddess of knowledge) in ancient Greece, is spelled with only one “a.”

board of trustees — Lowercase. Exceptions include commencement programs and official invitations from the Office of the President.

board of visitors — Lowercase. Exceptions include commencement programs and official invitations from the Office of the President.

buildings — On first reference, use the full name of the buildings that house the University’s four colleges. Example: E. Craig Wall Sr. College of Business Administration Building or Thomas W. and Robin W. Edwards College of Humanities and Fine Arts. On subsequent references: Wall Building or Edwards Building. Also, the Spadoni College of Education is located in the Prince Building. See also: colleges.

The hospitality area located on the third level of Brooks Stadium is the Kline Hospitality Suite.

The hospitality areas located on the second level of the HTC Center are the LeForce Suite and the Springs Suite.

business cards — The Office of University Marketing and Communication has standards and guidelines in place for all University business cards designed and printed by the print shop, including those for students and members of the Department of Athletics. Room numbers are not permitted on business cards, nor are personal websites, social media handles or email addresses. The design and text follows the templates below, with no exceptions. 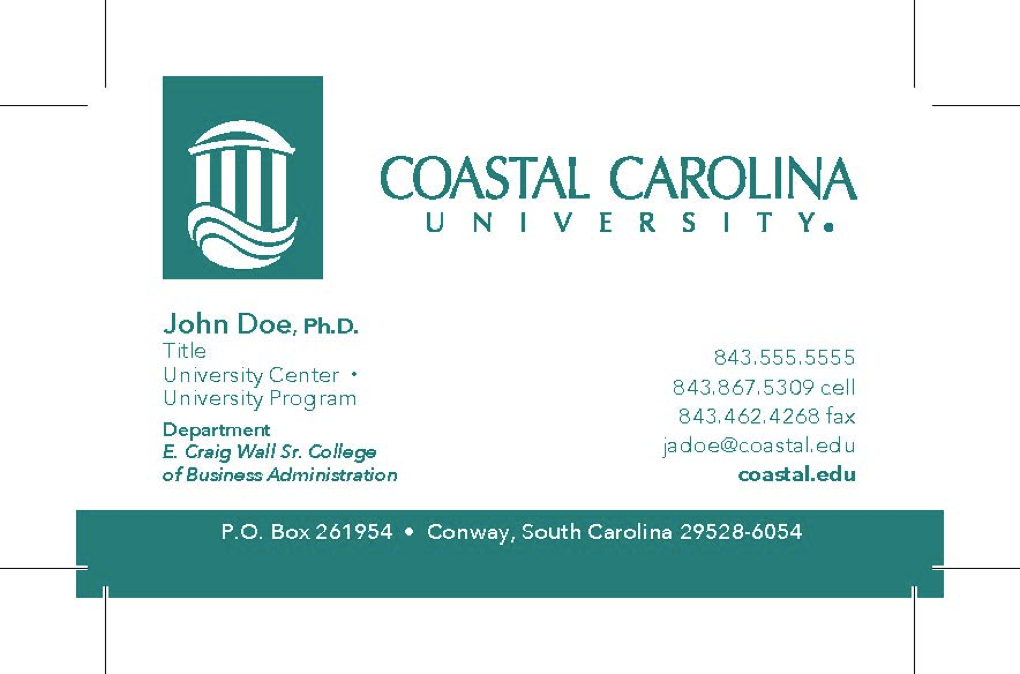 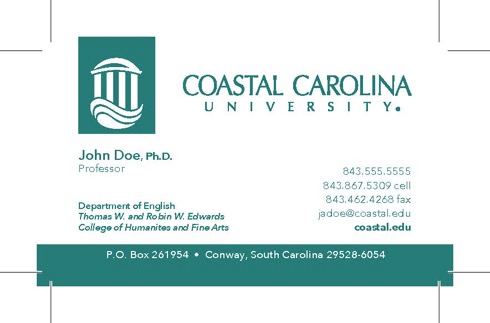 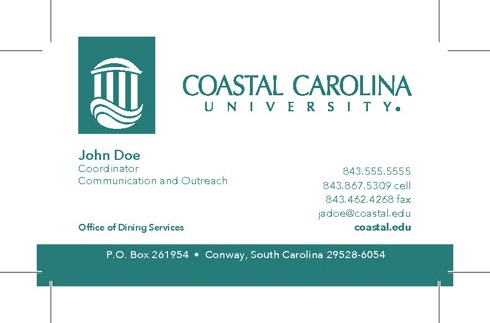 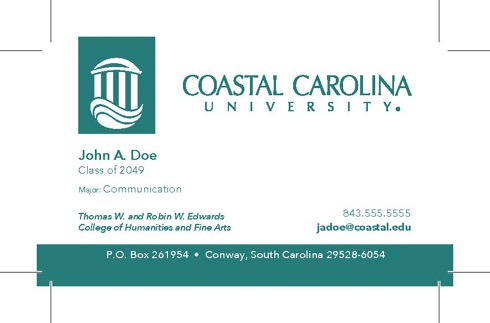 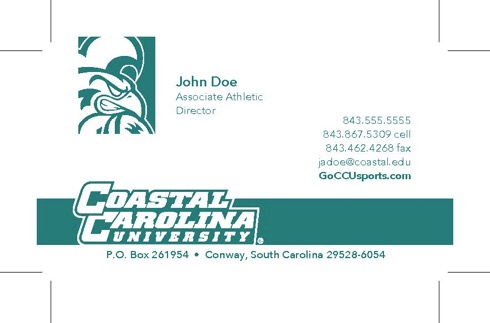 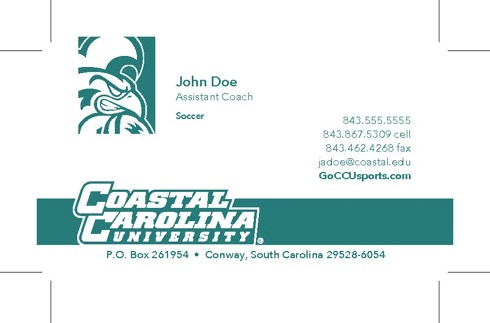 chairman/chair — Use chairman or chair, not chairperson.

College of Science (no abbreviated form)

commas — No comma before the conjunction in a simple series. The following examples are from the AP Stylebook: The flag is red, white and blue. He would nominate Tom, Dick or Harry. However, in more complex constructions, commas are sometimes required to ensure clarity. Examples: I had orange juice, toast, and ham and eggs for breakfast. The main points to consider are whether the athletes are skillful enough to compete, whether they have the stamina to endure the training, and whether they have the proper mental attitude.

Use a comma to separate cities and states. Example:  He drove from Columbia, S.C., to Washington, D.C.

cross country — An exception to AP, which hyphenates the NCAA sport.

dates — As a general rule, spell out the names of the days of the week. When a month is used with a specific date, abbreviate the months Jan., Feb., Aug., Sept., Oct., Nov. and Dec. Spell out the others. Spell out all months when used alone or alone with a year. Example: February 2005 was a cold month. The coldest day of the month was Feb. 18. Hurricane Hugo struck on Sept. 21, 1989. Shakespeare’s birthday is traditionally observed on April 24.

Exceptions: Months may be spelled out on invitations or programs and posters when appropriate, but must be consistent throughout the piece.

dimensions — Use figures and spell out inches, feet, yards, etc. When dimensions are used as adjectives, hyphenate the adjectival elements of the sentence. He is 5 feet 6 inches tall; the 5-foot-6-inch man; the 9-by-12 foot rug.

dollars ­— Always use a dollar sign and the numerals when citing a specific amount; otherwise, spell out dollar, which is always lowercase. Example: He gave $47 million to his alma mater, but the gift was made in rubles, not dollars. For cents, spell out the word cents in lowercase, using numerals for amounts less than a dollar (5 cents, 54 cents) and for amounts larger than one dollar use the $ sign and numerals ($1.01).

dorms — Use residence halls instead of dorms or dormitories.

Dr. — The title “Dr.” is reserved for individuals who have M.D. degrees. For academic titles, the preferred form is to list the person’s title in a clause set off by commas. See also academic and administrative titles or academic degrees.

Example: Dan Abel, professor of marine science, will give a lecture on March 31.

The title Dr. may be used in quotes. Example: “Dr. Olsen required us to attend the exhibit,” the student said.

#CCU #TealTip: It's email, not e-mail. It's online, not on-line. (@APStylebook has a thing against hyphens. Sometimes.) #amediting

Emeritus — Formal titles for retired faculty. In keeping with the general style for titles, uppercase before the name and lowercase afterward.

majors — Majors, minors and subjects are lowercase except for languages.

Example: This semester, she is taking history, calculus, English and Spanish.

numbers — In text, spell out the numbers one through nine. Use numerals for 10 and above. However, use numbers for percentages, ages, dates and money values.

Examples:
After eight years as coach, he has led his team to 32 titles.
Enrollment applications increased by 4 percent.
Mary is a 9-year-old girl.
She inherited $12 million.
Tonight marks the fifth anniversary of The Nutcracker in Wheelwright Auditorium.

online — One word when referring to computer communications.

Orientation — Capitalize when referring to the mandatory Orientation event for new and transfer students at Coastal Carolina University.

quotation marks — Common journalistic and literary practice differs from academic practice when it comes to the relationship between quotation marks and other marks of punctuation, particularly the period and comma.

From The Associated Press Stylebook: Follow these long-established printers’ rules: The period and the comma always go within the quotation marks. The dash, the semicolon, the question mark and the exclamation point go within the quotation marks when they apply to the quoted matter only. They go outside with they apply to the whole sentence. Examples: This is commonly known as a “red herring.” (not …herring”.) Why does he use the word “poison”?

quotation marks vs. italics — The Associated Press also calls for quotation marks rather than italics for titles of books, plays, movies, etc. (“Light in August,” “Our Town,” “Psycho”). However, it is admissible to use italics for such titles as long as they are used consistently. Titles of short works such as songs or sections of long works (short stories, chapters, articles, essays) should go in quotation marks. (The Chicago Manual of Style is a good guide for the italicization of titles.)

spacing — Only one space between sentences and after colons, not two.

Example: James Agee was from Tennessee. He was born in Knoxville, Tenn.

Note: The Associated Press changed its rule regarding state abbreviations recently; however, UC still follows the abbreviation rules outlined above.

Teal Nation — The term used to describe the community of Coastal Carolina University, from students to faculty and staff to alumni. When used on social media, the hashtag #TEALnation is preferred.

theater/theatre — Use “re” in all references to Coastal Carolina University theatre degrees and performance venues.

Examples: Coastal Carolina University offers four separate degrees in theatre; The Department of Theatre has 21 faculty and staff members. The theatrical facility in the Edwards Building is called the Edwards Theatre. Use “er” when the word is used generically. Example: Their public feud made for good theater.

Exception: The space inside the Lib Jackson Student Union that shows movies is The Coastal Theater.

titles — Capitalize formal titles when they are used immediately before a name. Example: President David A. DeCenzo. Lowercase titles when used in constructions that set them off from a name by commas. Example: Michael Roberts, dean of the College of Science. Do not use courtesy title (Mr. or Mrs.), except for medical doctors and then use Dr. only on first reference. See also: academic and administrative titles and Dr. and Mr., Mrs., Ms.

University — Capitalize when the word is used in relation to Coastal Carolina University. Otherwise lowercase. Example: The University celebrated its 60th anniversary in 2014. Colleges and universities across the nation are affected by the ruling.

website — Lowercase, one word. Also, webcast, webmaster and webcam are one word. But as a short form and in terms with separate words, the Web, Web page and Web browser.

www and/or https:// prefixes should be deleted from all website references where valid, and web addresses should not be underlined or presented in different colors unless you are including a live Web address link in your electronic communication. Exceptions exist, and always err on the side of consistency throughout an entire piece.

Student organizations may create their own logos as long as they do not incorporate University branded elements into their designs. This includes the use of the athletic, academic, and presidential logos, or any type treatment of “CCU,” “Chanticleer,” or “Coastal Carolina University.” The word “Coastal”  may be used.

Departmental logos are to be used for promotional giveaways only, like pens, stress balls, etc. Notepads and scratchpads should also be produced on-campus.

All copy needs and jobs with print quantities of 1,500 or less can be produced in the University print shop and should not be outsourced. This is done not only to save the University money, but to also guarantee quality control and consistency with the CCU brand. Decisions to allow outsourcing are made on a case-by-case basis for special needs that may exceed the print shop’s capabilities.

Note: Adding personalization to a signature is acceptable. For example, adding a University or departmental logo to the bottom of your signature file, or adding a first-name signature at the top, or including a “Go Chants!” at the bottom. The purpose of the signature file is to make sure email recipients have all the information they need to reach the sender in the way that best suits them.