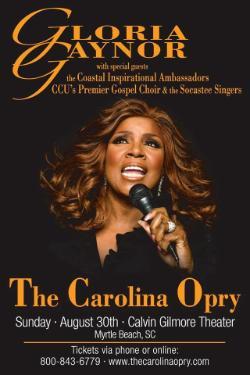 Gloria Gaynor's disco anthem "I Will Survive" is among 25 sound recordings that have been selected for preservation at the Library of Congress. Each year since 1911 the library has chosen recordings that are "culturally, historically or aesthetically significant" and are at least 10 years old.

Accompanying an Associated Press article about the honor is a video of Gaynor's impromptu performance with CCU's Inspirational Ambassadors during the 2016 Women's Leadership Conference. The group also joined Gaynor for a concert in August 2015 (see promotional poster at right). Gaynor was a keynote speaker for the conference and was honored during the annual Celebration of Inspiring Women. The article was published in numerous media outlets across the country on March 23, 2016.