‌Anne Tilghman Boyce was born April 24, 1919, in Columbia, S.C. She graduated from Winthrop College in 1939 and earned a master's degree in nursing from Yale University in 1941. During World War II she served in the U.S. Public Health Service in Italy and North Africa. She later taught nursing courses at Coastal Carolina College, Florence-Darlington Technical College and Francis Marion College. 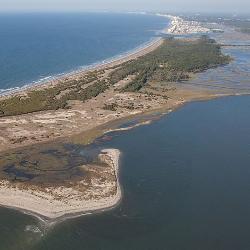 Prior to her death in 1988, Boyce began a dialogue with Coastal Carolina administrators regarding her wish to preserve her property on Waties Island and Tilghman Point for education and research. Her goal was realized after her death through the generosity of her children and other family members. The property became the Anne Tilghman Boyce Coastal Reserve and is protected indefinitely by a perpetual conservation easement through The Nature Conservancy of South Carolina. The property is an outstanding example of an undeveloped complex of ocean frontage, fresh and saltwater marshes, tidal creeks and upland woods. Surrounded by a rapidly urbanizing environment, it is becoming increasingly significant for research, monitoring and education about the natural coastal habitat.

In addition to the gift from the Anne T. Boyce family, a substantial financial gift was made to the Coastal Educational Foundation by her sister-in-law, Kitty Lou Tilghman. Subsequently, an adjacent 4.65 acre tract located along Little River was donated to the Coastal Educational Foundation by Rebecca Randall Bryan and a 49.92 acre tract was donated by Horry County, bringing the total acreage to 1,105.17 acres.

Boyce was posthumously named an honorary founder of Coastal Carolina University in 1997.