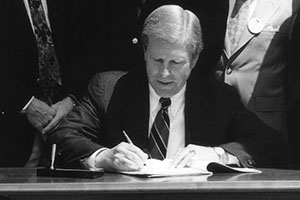 ‌Carroll A. Campbell Jr. (1940-2005) served as governor of South Carolina for two terms, from 1987 until 1995. At a campus ceremony on May 14, 1993, Campbell signed the bill that established Coastal Carolina University as an independent, state-supported institution, effective July 1, 1993. The ceremony was held on the portico of the Singleton Building and is noted on a historical marker in Blanton Park.

At age 30 Campbell was elected to the S.C. House of Representatives, where he served for four years. In 1974, he was named executive assistant to then-Governor James B. Edwards. He went on to serve in the S.C. Senate for two years before being elected to the U.S. House of Representatives in 1978 as the first Republican to represent South Carolina's 4th District in the House since Reconstruction. Campbell remained in Congress until 1986 when he was elected governor of South Carolina.

As governor, Campbell championed economic growth and education reform. He was known for his leadership in the coordination of South Carolina's response to Hurricane Hugo in 1989 and was instrumental in attracting BMW to build its first U.S. manufacturing facility in South Carolina. He chaired the Republican Governors Association, the National Education Goals Panel, and the National Governors Association.

A native of Greenville, he was educated at the University of South Carolina and American University. He was diagnosed with Alzheimers disease in 2001 and died in 2005.

Carroll A. Campbell Jr. was posthumously named an honorary founder of Coastal Carolina University in 2006. He was represented by his wife Iris Campbell and their sons Carroll and Mike.

For his steadfast support in securing the independence of this institution, for his distinguished record of government service, and for his sincere and determined effort to advance the social and economic well-being of the citizens of the state...