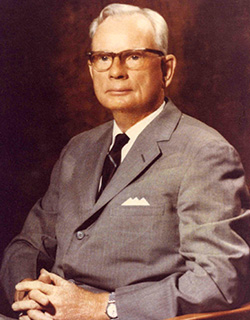 Edward E. Burroughs, a Conway businessman was among the group that formed the Coastal Educational Foundation Inc. He devoted a great deal of time and effort to the developing institution. Burroughs was instrumental, through his personal contribution and his work with others, in obtaining the tract of land on which the campus is located. He was also one of the leaders in the fund-raising drive for construction of the first building on campus, later named the Edward M. Singleton Building in honor of the first chancellor. A charter member of the Foundation, he served from 1954 through the 1960s, and served as president in 1958.