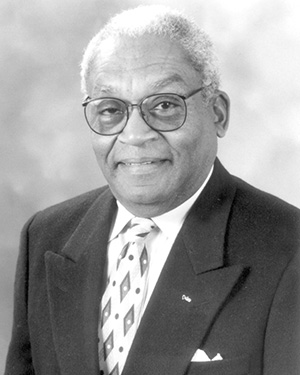 George L. Williams, of Conway, a retired educator and civic leader, served on Coastal Carolina University's board of trustees from 2000 to 2003 and on the Horry County Higher Education Commission from 1995 to 2000. As Coastal Carolina's first African-American instructor, he taught part time from 1969 to 1974. In addition, he served as the director of minority student relations at Coastal from 1986 to 1991.

He taught in the public schools of Horry County at Chestnut, North Myrtle Beach and Whittemore high schools, and was vice principal at Conway High School. He was principal of North Myrtle Beach High School from 1974 until he retired in 1986 after serving 12 years as the only African-American high school principal in Horry County since integration began in 1970. In addition to his career as an educator, Williams has been associated with his family's business, McKiever Funeral Home, for many years.

Williams earned a bachelor's degree in pre-law in 1953 and a master's degree in education and public school administration in 1961, both from South Carolina State College.

Williams has served on the board of many organizations in the region, including First Citizens Bank in Conway and Conway Hospital. He was chairman of the board of trustees of Horry-Georgetown Technical College from 1977 to 1983. The Conway Area Chamber of Commerce recognized his service to the community with the Laverne H. Creel Lifetime Achievement Award in 1992.

He was named an honorary founder of Coastal Carolina University in 2005.