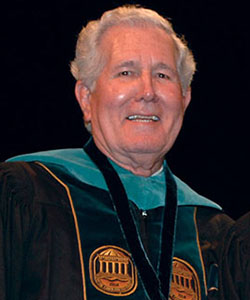 ‌A native of Conway, James J. "Jimmy" Johnson attended Horry County public schools before serving in the U.S. Navy from 1953 to 1956. He studied at Coastal Carolina College, graduating in 1959. As a student and alumnus, he amassed a number of CCU firsts. As a member of the basketball team, he was the first student-athlete to receive an athletic scholarship. He was the first president of Coastal's alumni association. In 1985, he was the first CCU alumnus to be awarded an honorary degree by the University of South Carolina (Coastal's parent institution at the time). When Coastal was awarded independent status by the South Carolina legislature in 1993, Johnson was elected the first chairman of the board of trustees, serving from 1993 to 1995; in 1998 he was named trustee emeritus.

For most of his professional career, Johnson was president and treasurer of Dargan Construction Company of Myrtle Beach where he retired in 2000 after 44 years. He was a longtime member of the Coastal Educational Foundation and the Horry County Higher Education Commission. Johnson was inducted into CCU's Athletic Hall of Fame in 1991. In 2002 he received the Distinguished Alumnus Award. In 2012 the board of trustees named the Wall Auditorium in honor of Johnson.

Johnson was named an honorary founder of Coastal Carolina University in 1996.