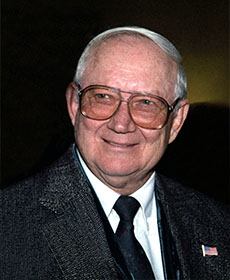 John Wilson Dawsey, former superintendent of education for Horry County, was associated with Horry County Schools for 39 years in many capacities, from high school math teacher to elementary school principal.

He served on the Horry County Higher Education Commission for more than 30 years, including serving as chairman from 1993 until 2004. Dawsey was also chairman of several committees including the academic, nominating and executive committees. He was named chairman emeritus of the commission in 2005.

He earned a bachelor's degree from Clemson University and master's and education specialist's degrees from Appalachian State University.

In 2004, he was awarded the state's highest civilian award, the Order of the Palmetto. In 2005, the conference room in the first campus building, the Edward M. Singleton Building, was named the John W. Dawsey Horry County Higher Education Commission Conference Room. He was awarded the honorary degree Doctor of Public Service from Coastal Carolina University during the May 2005 commencement ceremony.

Dawsey was named an honorary founder of Coastal Carolina University in 1998.