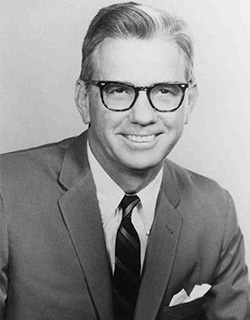 Joseph W. Holliday, from Galivants Ferry, S.C., was a leader in the governance of Coastal Carolina in its formative years.

In 1958, Holliday was named chairman of the Coastal Educational Foundation (CEF), the college’s primary governing board. The following year, he became the first chairman of the Horry County Higher Education Commission, which was organized to oversee the use of the county tax millage dedicated to the college. His first official duty as commission chairman was to preside at Coastal Carolina Junior College’s inaugural commencement ceremony. On the evening of May 27, 1959, in the auditorium of Conway High School, he awarded associate degrees to five students.

A few months after that historic occasion, Holliday and fellow members of the CEF’s executive committee met with representatives from the University of South Carolina at the Chat ’n’ Chew restaurant in Turbeville, the geographical halfway point between Conway and Columbia. During that meeting, the two sides forged a partnership that established Coastal Carolina Regional Campus of the University of South Carolina. The longstanding partnership between Coastal Carolina and USC lasted until July 1, 1993, when legislation was signed to establish an independent Coastal Carolina University.

Holliday continued to serve on the foundation until he died in 1981.

CCU’s Joseph W. Holliday Endowed Scholarship is named in his honor. A portrait of Holliday, donated to CCU from his family in 2015, hangs in CCU's Atheneum Hall Alumni Center.

In 2018, the family of Joseph W. and Frances F. Holliday of Galivants Ferry made a financial contribution to the College of Science at Coastal Carolina University. The newly established endowed fund will support research by marine science students working on sustainability issues related to oceans. Preference will be given to projects by students who are formally enrolled in the sustainability certification program. In recognition of the establishment of the Department of Marine Science Endowed Program Fund in Sustainability, the dean’s suite in Science Annex II will be named the Joseph William and Frances Fields Holliday Dean's Suite in memory of the parents of William and Judson Holliday and Betty Holliday McLeod.