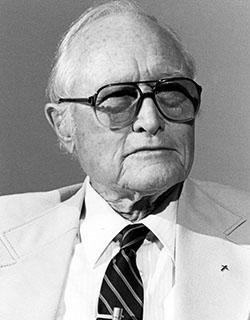 Thurman Wilson Anderson (1909-1996) was born in the Adrian section of Horry County in South Carolina, attended Baxter Grammar School and graduated from Burroughs High School in Conway where he was salutatorian of the class of 1927.

Anderson attended Clemson University, Furman University, and Newberry College and received a master's degree in education from the University of South Carolina in 1959.

Anderson's involvement in Horry County education extended more than 75 years. Elected in 1941 as county superintendent, he fought hard to improve educational opportunities for the young people of this region. Anderson presented the idea of establishing a college in Horry County to the County Board of Education and pursued the idea by generating support among community leaders. With his guidance, Horry County's implementation of desegregation in the 1960s became a model for the state. Anderson attributed the successful desegregation of the Horry County Schools to cooperation, mutual respect, and honesty among leadership in both the black and white communities. He retired as county superintendent in 1973.

As superintendent, Anderson recognized the need for teachers in the county to be able to get college credit locally, and was instrumental in the establishment of what is now Coastal Carolina University. Anderson presented the idea of establishing a college in Horry County to the County Board of Education and pursued the idea by generating support among community leaders. Then, with a group of interested citizens, Anderson attended a meeting at the Horry County Memorial Library on July 23, 1954, to discuss the creation of a local college. When funds were needed to support the group's efforts, Horry County teachers were among those who donated to the cause.

Among the awards bestowed upon Mr. Anderson are the American Legion Distinguished Service Award for service to the community, the Greater Myrtle Beach Chamber of Commerce Award for 30 years of outstanding leadership in developing quality education in Horry County, and the Sertoma Club's Service to Mankind Award. In 1992, he was the first inductee into the Conway High School Hall of Fame and received the Outstanding Educator Award.

He was presented a Founders Medallion during Coastal's first Founders Day Convocation in 1987.

For his outstanding contributions to public education for more than 40 years; for his deep commitment to the academic development of the local community; and for his dedication to improving the quality of life for the citizens of Horry County, he was awarded the honorary degree Doctor of Public Service from Coastal Carolina University during the May 1994 commencement ceremony.